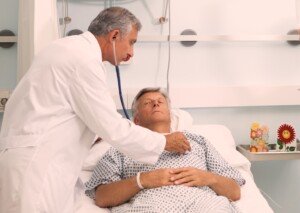 Are you wondering if excess abdominal fluid, called ascites, can cause an already weak heart to be strained, leading to ADHF?

And if so, would this be due to a mechanical type of pressure or just what, exactly?

This question might come up if a person with chronic heart failure skips some doses of their diuretic medication, causing fluid buildup in the abdomen — though usually such fluid accumulation would occur in the lungs and/or lower extremities.

Congestive heart failure on a chronic basis can cause ascites, though the abdomen is a very uncommon site for unmanaged fluid buildup from CHF.

There is a such thing as “cardiac ascites.” However, ascites is usually caused by something wrong with the liver.

And, in fact, a person with advanced chronic heart failure very likely has a poorly functioning—though afloat—liver. Its compromised nature can remain under the radar for years.

Now if their liver suddenly gets worse (decompensates), ascites will likely result.

When the liver becomes very ill, regardless of cause, its major vein gets backed up, causing ascites.

So should people with CHF worry that a five or seven pound buildup of ascites—whether it’s cardiac in origin or hepatic in origin—could send their heart into acute decompensation?

“Ascites is just the fluid that can build up in the abdomen when the liver is not working well,” says Mark Pool, MD, a board-certified cardiothoracic surgeon based in TX who’s been in private practice since 2011.

“I’m sure it’s a gross oversimplification, but I think of it as another form of fluid backup, where the liver is not processing the blood from the bowel correctly, so the fluid/blood in the bowel can build up, and ‘spill out’ into the abdomen,” continues Dr. Pool.

“Now, don’t misinterpret me, I am NOT saying that the contents of the bowels spills out — that would be related to a perforation like appendicitis or diverticulitis and would contaminate the abdomen and be an emergency.

“No, I’m just saying that the fluid has to go somewhere and it sort of oozes through the [cell] membranes and collects in the abdomen.

“It may alert the patient/doctors that there may be poor heart function as a part of the puzzle of the liver failure, but it is almost impossible for enough fluid to build up in the abdomen to cause a mechanical disturbance to blood flow that would affect the heart function.

“There may be some fluid shifts and shifting of salt/protein/etc., that may worsen the cardiac performance, but those shifts are unlikely to cause acute heart failure.”

“Unlikely” does not mean “impossible.” Ascites CAN tip the heart over the edge, but in cases of ADHF, the tipping agent is rarely ascites.

Think of how many people with primary liver disease (alcoholic cirrhosis, viral hepatitis) who ALSO have chronic heart failure look nine months pregnant due to severe ascites from their liver, yet they aren’t jamming up emergency rooms due to decompensated heart failure.

ADHF is characterized by a sudden or abrupt worsening of pre-existing symptoms and/or new-onset symptoms.

An example might be someone who historically has complained of shortness of breath and has very little stamina but otherwise is fine.

Then they begin feeling a little off and more tired out than usual and may complain of more frequent episodes of breath shortness.

In addition there’s nausea, a little stomach upset and loss of appetite. There may be a few pounds of unexplained weight gain yet no visible lower leg/foot fluid buildup (because it’s in the form of ascites).

These symptoms can mean a host of conditions unrelated to chronic or acute heart failure. But they could also signal the start of ADHF.

New-onset ascites is a very worrisome symptom. There is no benign condition that causes excess fluid to leak into the abdomen.

For example, a person with acute decompensated heart failure who has ascites may also have ovarian cancer—which in a more progressive stage, is notorious for causing ascites!