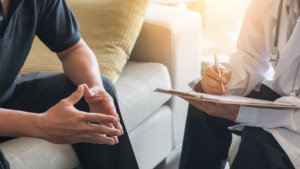 Prostate cancer kills, while other patients live decades after diagnosis. What can be done to identify the lethal forms of prostate cancer?

Aggressive disease upon diagnosis often has a grim outlook. A diagnostic biopsy involves placing a needle into the walnut-sized prostate gland at standard locations or “cores.” MRI and ultrasound are sometimes used for visualization.

New Technology with Biopsy Cores
Usually there’s a dozen cores or locations where tissue is extracted for biopsy to check for the presence of cancer cells.

If cancer is present, a score, called Gleason, is assigned, based on the changes in glandular architecture.

A Gleason of 6 or less means a slow growing or indolent malignancy. A patient with a borderline Gleason score may still undergo surgery – which reveals a more aggressive cancer.

On the other hand, there are men with high Gleason scores whose surgery reveals indolent cancer.

Michael Wigler and Alexander Krasnitz, of Cold Spring Harbor Laboratory, have developed a method that sequences the genomes of hundreds of single cells taken from each biopsy core.

CNV patterns are compared. DO any cells have CNV profiles that have the same irregularities? If so, this means “clonality.” Malignant tumors are made of clonal (aberrant) cells.

Each set of biopsy cores gets a number that’s based on how many of the cores have clonality; how many clonal cells that each core contains; and how far these clonal cells have dispersed within the prostate.

“This is important because treatment decisions in such cases depend on the pre-surgical biopsy, not the surgical specimen,” says Krasnitz in the report (Cancer Research, 2017).