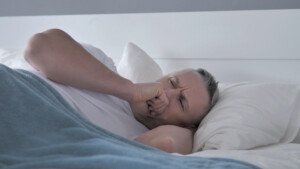 Okay, so which is it: sleep apnea or laryngospasm, being that both can cause you to abruptly wake in the middle of the night gasping for breath?

Both conditions – sleep apnea and sleep related laryngospasm – are described the same:

And the “gasping for air” from laryngospasm in the middle of the night is just as freaking frightening as the “choking sensation” of sleep apnea.

The vocal cords suddenly seize and close when you’re inhaling, blocking the airway.

The brain senses the lack of oxygen and awakens you.

By then you’re oxygen-deprived and realize you can’t breathe.

The experience sometimes makes people bolt upright in bed or leap out of bed.

The closed airway does not open when you sit up because the cause is not related to gravity causing the tongue to collapse onto the airway while lying flat.

Lasts one to two minutes, or possibly seconds, during which speech is not possible.

As the vocal cords begin reopening, one’s inhalations create a high pitch sound (stridor). The stridor may be loud enough to awaken a bed partner.

The voice is usually hoarse immediately after the episode resolves.

Triggered by overnight acid reflux; the acid reaches the larynx. There isn’t necessarily heartburn or chest pain from the acid.

Not eating within three hours of bedtime may eliminate or reduce laryngospasms.

Data on the Sleep Apnea Gasp

Usually, but not always, preceded by snoring.

The tongue falls back onto the airway, obstructing it, compressing the uvula into it as well.

The brain, when sensing the cut-off, may arouse enough to awaken the person to full consciousness.

“With OSA breathing is restored immediately, while with laryngospasm it may take one or two breaths,” says Dale Rice, MD, professor of otolaryngology-head and neck surgery, Keck School of Medicine USC.

There may be residual micro-gasps for a few moments, but by and large, one good gulp of air is often all it takes to restore normality.

Sitting upright also instantly corrects the problem because it immediately reverses the effect that the lying (supine) position has on collapsible throat structures.

No stridor or hoarse voice.

In general, a sleep apnea gasp is corrected during consciousness much faster than is a laryngospasm.

Not responsive to avoiding food before bedtime.

Do not attempt to diagnose yourself. THERE IS OVERLAP between the laryngospasm and sleep apnea gasp.

Speak to your doctor about a polysomnography (sleep study), which is the gold standard for diagnosing disordered breathing.