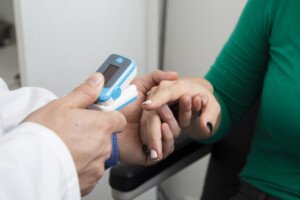 Being that sleep apnea causes sustained low oxygen levels (desaturation) all night long, you’d think that a finger pulse oximeter alone would be a standard way to detect sleep apnea.

But it isn’t. When sleep apnea is suspected, the patient is encouraged to undergo a “sleep study” (polysomnography) at a lab.

The alternative is a home sleep study that entails a lot more than just a gadget on one’s finger.

In fact, oximetry data is always part of the sleep studies at labs or home polysomnography.

“As a screening tool for the diagnosis of OSA,” continues the paper’s conclusion, “pulse oximetry is cost-effective and shows substantial accuracy.”

However…
However, the paper also points out that pulse oximetry has limitations. “Limitations result from problems with blood flow, hemoglobin, or a lack of change in oxygen saturation,” says the report.

Because pulse oximetry relies upon pulsatile flow of blood for its data, it’s vulnerable to effects of poor peripheral (extremities) arterial blood flow.

What this means is that during sleep, the patient’s natural and apnea-triggered body movements, plus blood vessel constriction and low blood pressure during apneas, can throw off the measurements.

The body movements cause what are known as artifacts. The oximeter device doesn’t always detect these, leading to overestimation of inadequate oxygen (desaturation).

“Changes in the hemoglobin structure and quantity will also cause artificially high or low readings that are not due to respiratory disturbances,” says the paper.

Obesity may further trip up the accuracy of oxygen measurements due to “tissue optics.”

If you suspect sleep apnea but recently had a negative overnight pulse oximeter result, you may want to consider a sleep study – at least the home version.

Another reason why the single metric of pulse oximetry isn’t usually the first recommendation when a doctor suspects disordered breathing is because that little finger device cannot detect sleep disorders in which desaturation is absent.

This is because apneas do not occur, but labored breathing does.

Because of the patient’s airway defect, the brain is repeatedly aroused just enough to induce a high respiratory workload (“heavy breathing” but not snoring).

These repeated arousals prevent the brain from achieving adequate restoration – resulting in daytime symptoms like sleepiness.

The Hang study involved 540 patients suspect for moderate to severe OSA, after eliminating others due to respiratory artifacts and other issues (e.g., insomnia, age over 85) that could trip up measurements.

“Home-styled oximetry may be a tool for severe OSA diagnosis,” says the paper.

But remember, polysomnography – though expensive, cumbersome and time consuming – yields a 100 percent accuracy, specificity and sensitivy for the detection of sleep apnea and other nocturnal breathing disorders.