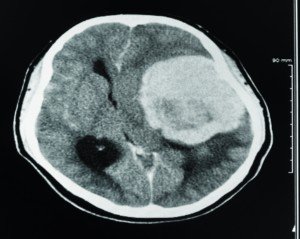 It may seem that the most plausible explanation for Stephen Paddock’s Vegas shooting rampage is a brain tumor.

The idea of a brain tumor causing Stephen Paddock’s premeditated savagery has not been broached by the media.

How does a man (albeit being raised by a violent criminal) who (apparently) lives extremely normally for decades suddenly decide to wipe out as many people as possible with a massive arsenal of automatic rifles?

Can a brain tumor cause a previously normal (or so it seems) person such as Stephen Paddock to premeditate a mass shooting and then carry out this act?

“Aggression and violence have rarely been presented in the neuro-oncology [brain cancer] literature, but have been well documented in stroke and dementia literature,” says a report in Journal of Neuro-Oncology (Sept. 2009, Villano et al).

The report focuses on the case of a man, 55, with a glioblastoma type of brain tumor, who committed an act of violence against his wife.

But that’s a far cry from assembling dozens of rifles and shooting at thousands of people from a quarter mile away.

In 1966 Charles Whitman (“Texas Tower Sniper”) killed 16 people, most from a tower at the University of Texas at Austin.

He was killed by police. A subsequent autopsy revealed a small brain tumor.

Intense analysis was done by various experts. No definitive conclusion was ever drawn regarding the effect the brain tumor may have had on the decision to go on a killing spree, especially since there were multiple factors in Whitman’s life and history that came across as far more contributing.

In short, though a very intriguing topic of conversation, it’s not likely a brain tumor made Stephen Paddock strategically plan a mass assault on 22,000 people from the 32nd floor of the Mandalay Bay hotel. Do not bet on it.

Instead, place the bet on a common phenomenon: People can be as disturbed as heck without those “around” them ever knowing.

Ever hear of that old saying, “The evidence is right under their nose but they don’t see it”?

What’s more likely, and a lot more likely, is that those who “knew” Paddock best did not know him as well as they believed.

For example, just because someone is your brother doesn’t mean you really know him.

Yes, you grew up with him. But the last few decades, or more, could have consisted of only occasional (e.g., holidays, weddings, graduations) in-person contact — that lasted only days.

You only see the superficial, the game face, the guest-in-the-house personna — which can easily be switched on and off by a sociopathic individual.

Emails, texts and even regular Skyping sessions are not enough to really know what’s going on in even your own sibling’s mind.

In other words…did anyone really know this deranged and evil man? Even his own mother might not have had much contact with him over the years.

Do YOU really know the people who live on your street even though you see them all the time?

As that saying goes, “There are psychopaths among us.” The most seemingly normal person you know may be a vicious person behind closed doors. And usually, the creepiest people you know are the last ones to commit murder.

No matter how shocking Stephen Paddock’s behavior was to those who knew him, it’s still a very unlikely possibility that a brain tumor was the driving force.