Can Diabetes Cause Numbness on Only One Side? 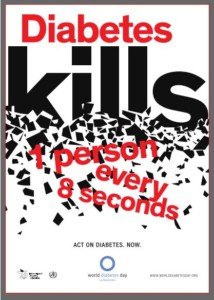 Numbness on one side of a large portion of the body is not normally caused by diabetes.

It also depends on how much of the body you’re referring to.

While diabetic neuropathy can cause numbness in one foot or in one lower leg, it usually starts in both lower extremities at about the same time.

Diabetes will not cause one side of the entire body to go numb.

However, the condition of diabetic proximal neuropathy typically begins on one side (thigh, pelvic and lower back region) and remains asymmetric in most patients for about three months, according to a study. But within three months, the other side becomes affected.

But there’s more: Diabetic proximal neuropathy, despite its name, the condition does not involve numbness.

“The condition is characterized by severe, typically asymmetric leg pain and weakness,” says a report in Neurology Today (Feb. 2004).

A report in Neurology (1999) details a study in which this condition began on one side for 33 patients. An average of three months later it was bilateral for 32.

Another name for this condition is diabetic amyotrophy.

Numbness on One Side of Body in Diabetes
In distal neuropathy, the hands or feet are affected, causing numbness or tingling.

It usually and gradually affects both feet or both hands, but can also be asymmetric—affecting just one hand or foot. This is a focalized problem; an entire leg or entire arm is not affected.

But diabetes does not cause one side of the entire body to go numb while the other side is perfectly fine.

Mononeuropathy, as its name suggests, affects only one side, and that one side can be a leg. When it affects a leg, however, the symptom is pain, not numbness.