Why Do Heart Tests Look Normal When All Arteries Are Blocked? 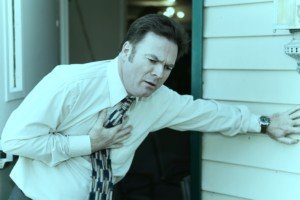 A heart stress test can show a normal result despite the three major coronary arteries being blocked enough to put one at risk for a heart attack.

While the exercise stress test is never 100 percent accurate, it’s still a valuable tool for determining in many cases what the next step should be for a patient complaining of symptoms.

An exercise stress test for the heart involves walking on a treadmill (or pedaling a stationary bike for those who have difficulty walking) for which the incline is gradually increased to force the heart to work harder. 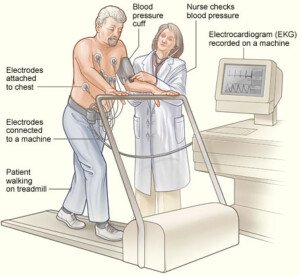 For those with physical limitations preventing even the use of pedaling, the stress test is done with a drug that makes the heart “think” the body is being exercised.

The tests can miss serious blockages in the three main coronary arteries: a false negative.

If a person has worrisome symptoms, and especially if the patient has risk factors for coronary artery disease, an abnormal test result is very meaningful.

However, if this same patient’s test results are normal, this does not rule out blocked arteries. It only suggests that the risk of having CAD is lower.

Things shouldn’t end there. A cardiologist will want to have more tests done.

The exercise stress test reveals oxygen flow through the heart during the stress of exercise (or simulated exercise with the drug). 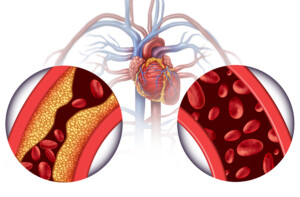 The stress test is designed to reveal a 70 percent or greater blockage.

If only one of the main coronary arteries is over 70 percent blocked, and the two others are, say, 20 percent blocked, the restricted blood flow through the 70-percenter will stand out like a sore thumb on the test.

However, if all three arteries are over 70 percent blocked – the blood flow will show the same on the test for all three vessels – it will be “balanced.” Nothing will stand out. The result will appear normal.

• During testing, blood flow through the three main coronary arteries is measured.

• A clogged artery will struggle to dilate in response to the stress. A healthy artery easily dilates.

• Because the diseased artery’s pathway, through which blood flows, is narrowed due to plaque, the blood flow during exercise stress is reduced.

• The test involves a radioactive tracer that “lights up” on an image showing the heart during the test.

• The portion of the heart muscle that’s fed by a diseased artery will light up LESS than the portions that are fed by healthy arteries.

• If all three arteries have significant blockage, the radiotracer will light up the same in the three areas of the heart muscle that these three vessels feed into. I.e., there will be equal uptake of the radiotracer.

• Insufficient blood flow in the heart is determined by relative blood flow rather than absolute.

• As a result, blockages in all three arteries (“balanced 3-vessel disease”) can create a normal result.

“A normal stress test does not exclude blocked arteries 100% of the time,” says Yaser Elnahar, MD, a cardiologist with Hunterdon Cardiovascular Associates in NJ.

“Balanced ischemia is one of several reasons why a stress test can be normal and is missing severe blockages.

“If you have cardiac symptoms and have a normal stress test, your doctor should consider other tests like a cardiac catheterization or coronary CTA, if appropriate.”

During the stress test there is also an EKG being done, and the cardiologist will be looking at this for signs of coronary artery disease.

• However, if the patient underwent the drug-exercise simulation version, ischemia probably will not show on the EKG.

• An astute nuclear medicine doctor can still suspect dangerously blocked arteries due to other components of the test, along with consideration of the patient’s medical history, current situation and complaint of symptoms (e.g., chest pain upon exertion).

• A coronary angiogram (cardiac catheterization) is the gold standard for showing blockages and will not miss blockages.

However, this test is invasive and comes with serious risks — though serious complications are rare.

In short, the technology does not (yet) exist that would show an absolute value for blood flow in a coronary artery while the heart is stressed from physical exercise or simulated exercise from a drug.

This is why a heart stress test can miss blocked arteries.

Dr. Elnahar has publications in the Journal of Atrial Fibrillation, the Journal of Clinical Medicine and Research, Reports in Medical Imaging, and more.