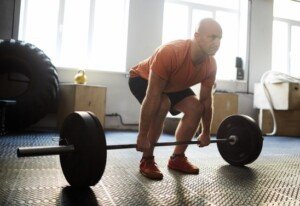 There are several few ways that doing deadlifts with a fixed weight barbell differs from using an Olympic bar with plates.

First off, you will note that the fixed weight or preloaded barbells are much shorter than the standard Olympic bar.

Training in the deadlift with a fixed weight barbell means that the mechanics will be a little bit easier due to the shorter length.

So though you’ll get stronger, it will be an adaptation to a shorter length bar.

However, a bigger difference when it comes to fixed weight barbell vs. Olympic barbell deadlifts is that the preloaded bar is closer to the floor in the start position.

If you load an Olympic bar so that the entire thing weighs 100 pounds (25 pound + 2.5 pound plate on each side), the diameter of the 25 pounders will elevate the bar higher off the floor than the height of a standard preloaded bar.

If you’re deadlifting 135 pounds with an Olympic bar (45 pound plate on either side), the bar is eight inches off the floor – a lot higher than a fixed weight 135 pound barbell.

Bending Over to Reach More
If you’re deadlifting with an Olympic bar loaded to, say, 85 pounds total, you’re about as close to the floor for that initial pickup that you’d be with a preloaded barbell.

But once you start using 25 pound, let alone 45 pound, plates for your Olympic bar deadlift, your range of motion to reach the bar will be shortened.

Now you may be thinking that continuing to train heavy with fixed weight barbells will benefit you more.

But a 135 pound deadlift with a fixed weight barbell does NOT mean you’ll be able to deadlift 155 pounds with an Olympic bar. It doesn’t work this way.

Proper Deadlift Form
The correct form at the beginning of the pull should have your hips LOWER than your shoulders.

This positioning will be more difficult to do if you’re using a fixed weight (closer to the ground) barbell.

As a result, your lumbar region will be subjected to stresses that will make it more vulnerable to injury.

If you begin training with the Olympic bar, once you get strong enough to pull 95 pounds, you can use the larger diameter 25 pound plates.

However, if your gym provides them, powerlifting plates — even at 10 pounds — are as big as the conventional 45’s.

Otherwise, as you get stronger, you can then use the conventional 35 pounders, then 45 pounders, allowing you to pull at the beginning of the move with your hips closer to the below position relative to your shoulders.

Depending on an individual’s body proportions, using fixed weight barbells will force them to start out with their hips ABOVE their shoulders.

This may be fine for lighter loads, but as you get stronger and pull more resistance, this increases the stress on the lumbar region of the back.

Using an Olympic bar with 45 pound plates, though higher off the floor at the start, has significant carryover to the lifting you may need to do in day-to-day life. 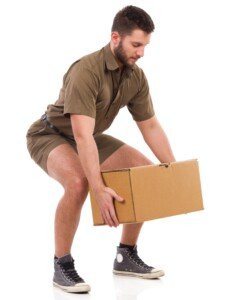 In other words, you do NOT need to pull from so close to the floor (as with a fixed weight bar) in order to develop impressive lifting strength that can be applied to a real life situation in which you must pick something heavy off the ground.

This is especially true if your program includes squats, deep leg presses and other back movements.

Pre-Loaded Barbells Usually Go Up to Only 120 Pounds

Another difference is that if you want to one day be deadlifting a lot of weight, you’re going to have to get used to the Olympic bar.

And what if the 100 pound, pre-fixed barbell is sitting on higher pegs? Would you be able to get it down? Many women will struggle with trying to get even a 70 pound bar off higher pegs.

The heavier bars are supposed to be placed on lower pegs, but it doesn’t always happen this way.

At least with an Olympic bar, you can load it AFTER it’s set in position.

When I was rehabbing from elbow tendonitis, I used fixed weight barbells. There was just no need at that point for the Olympic bar.

But once I got up to 80 pounds, I switched over to the Olympic bar. This gave me motivation to quickly move up to 95 pounds – a visual milestone, what with the 25 pound plates, after suffering for so long with elbow pain!

The Olympic bar is more motivating than the fixed weight barbell for deadlifts; allows you to use the best form possible; and can be loaded while either on the floor or on low supports.