Why Don’t Women Who Carry Toddlers Have One Huge Arm? 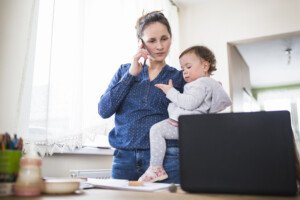 Many women carry their toddlers and preschoolers around, usually only with their dominant arm, yet that arm isn’t big with muscles, even though a child of two to three years may weigh 28 to 35 pounds.

Women who frequently carry their four-year-olds are weightlifting 40 pounds or so.

If you look at a mom who carries her children (maybe she has a two-year-old and a three-year-old) on a regular basis, can you tell which arm she uses?

Ironically, many women believe that if they take up strength training, they will develop “big” or “manly” muscles!

Even thin MEN who do a lot of child-carrying don’t have a conspicuously muscular carrying arm.

I’m a former personal trainer and was inspired to write this article after reading a thread in a strength training forum about women lifting weights.

The OP was reluctant to begin training with weights due to the anticipation that she’d get masculine muscles.

The funny thing is, few women believe they will develop noticeable or masculine muscles in the arm that does all their child carrying.

Go figure. Because I certainly can’t.

A toddler, let alone preschooler, weighs a lot more than a little pink dumbbell. That’s up to 40 pounds being supported on one side of the body.

Some women frequently find themselves carrying their young child. My sister-in-law is one of them, as her vehicle is parked across the street and she often carries her two-year-old in her dominant arm, while the four-year-old walks beside her.

This scenario plays out at least once a day, to and from the vehicle, at least six days a week. Yet her carrying arm and non-dominant arm look the same.

Think of a toddler and especially a preschooler as one big gym dumbbell. 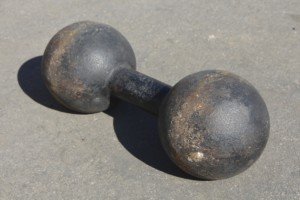 The primary muscle movers are the biceps when a woman carries her child at her hip.

Though the child’s arms around the mother subtracts some of the child’s weight, we’re still talking up to 40 pounds that the mother must support enough to prevent that child from falling.

Where are the big, masculine and manly muscles from doing this so frequently?

One of the reasons a woman does not develop one big arm from carrying her children is because her body does not produce enough testosterone.

However, dads don’t develop a big arm either. So something else is going on to prevent this from happening.

As often as she may think she carries her children around, the nature of the carrying is not sufficient to induce muscle hypertrophy (increase in muscle fiber size).

Though the biceps group is the primary mover here, other muscles also absorb some of the child’s weight, distributing it, rather than the 35 pounds being all concentrated in just the biceps.

And, it’s because she wants to get “big.” Visible muscle development does not happen by accident out of thin air.

I’m sure that if I closely inspected my sister-in-law’s biceps, I’d be able to detect a small difference. But for all practical purposes, one arm is NOT bigger than the other.

Women who want to take up strength training need not fear that they will end up looking masculine!