My Body Thought My Double Mastectomy Was Another Gym Workout 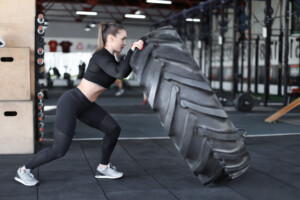 I killed the initial recovery for my preventive double mastectomy. This is because my body “thought” the surgery was just another one of my strenuous gym workouts.

I’ve been putting my body through killer workouts for years – and had always believed that my strenuous workouts would be “prehab” for any surgery I might ever have.

Hard gym workouts toughen the body for surgery including double mastectomy. Kickass workouts outside, too (e.g., hill dashing) can serve as prehab.

I had a prophylactic (preventive) double mastectomy without reconstruction (sister had breast cancer).

In addition to surgery, general anesthesia traumatizes the body.

A hardcore gym workout also traumatizes the body. Though the assault is very different than what goes on during surgery, the body gets hit hard – under the knife or under the barbell – and must recover.

You’ve heard of people “coming out of” general anesthesia. I popped out. There was no transition involving grogginess, slurred speech, stumbling for words, incoherence, etc.

Literally upon opening my eyes for the first time postop, I was talking clearly (though my voice was hoarse).

Right after the anesthesiologist had said, “I’m putting the mask on you,” as I saw him lowering the mask, the next thing I perceived was being in some kind of dark void while hearing a man’s voice telling me several times that the surgery went great.

I then realized this meant that the operation was over and it was time to open my eyes.

I turned to the left where the voice had come from and saw the doctor approaching me. I asked if that had been his voice and he confirmed it.

After thanking him I lucidly asked my nurse questions and responded appropriately to questions (e.g., pain level, name, where I was at).

I didn’t feel groggy and had no problem keeping my eyes open. In short, there was no transition. I literally snapped out of the general anesthesia.

My parents have had many surgeries, and I’ve always been in the recovery room with them.

They’d take quite a while to “come out of it” and had had surgeries more invasive than a double mastectomy, and though they’re senior aged, I’d also see middle-aged patients “coming out of it” gradually.

So it seems as though my speedy GA recovery is not the norm.

After about 10 minutes, I felt ready to do what I had envisioned doing prior to the double mastectomy.

And that’s doing leg exercises in the anesthesia recovery room to offset development of a blood clot.

Once I began lifting my legs and extending my knees, I told the nurse, “I’m very DVT conscious.”

For about 10 minutes I flexed and extended my ankles, bent and straightened my legs, moved my legs out and in repeatedly, tapped my feet to the bed post and bed, and a few other movements.

Twenty minutes after I had opened my eyes, the nurse began making arrangements to find me a room.

Five minutes later I was being wheeled out, noting that the man across from me – who had been “coming out of it” at the time I opened my eyes, was still in a stupor.

I’m convinced that taking only 20 minutes to recover from general anesthesia was courtesy of intense gym workouts.

Once I was in my room, the only issue was dizziness if I turned my head to the side. This is what kept me in bed.

The pain lessened as each hour passed, and about four hours later (around 4 pm) the dizziness was gone.

I was very mobile and taking walking laps around the unit, alternating with lying inclined in bed to let the surgical wounds heal.

I never needed any help sitting up in the bed or getting out, relying on my core strength while relieving my hands of involvement (pressing on the bed to shift body position triggered soreness).

Once I had dinner I stopped lying in bed and alternated walking laps with computer work.

How do you develop core strength to help recover from a double mastectomy? See the following exercises. 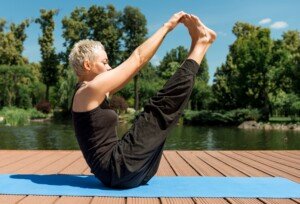 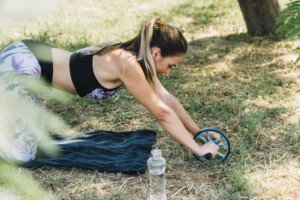 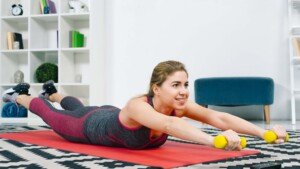 Don’t forget the deadlift, pushup, kettlebell swing and pull-up for strengthening the core. 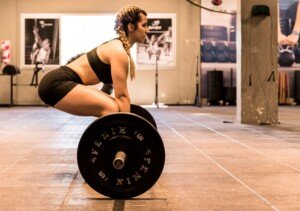 A fit resilient body begins with a tough core. Women should fiercely work on their pushups so that they can do them with their body ruler straight and feet elevated. 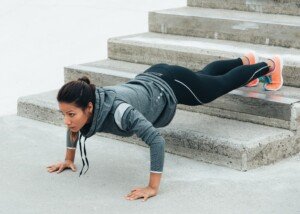 I can’t be convinced otherwise: My body thought the preventive double mastectomy was another brutal gym workout – and hence, wasn’t tripped up by the general anesthesia or surgery.

And it’s not just these particular exercises, but how heavy, burning and intense you do them. Turn your gym workouts into punishing sessions:

You just never know when you’ll be going under the knife. It was a shock when I found out my sister had breast cancer.

Workouts SHOULD be punishing – not to punish you for cheating on your diet, but because it’s the norm for your regimen, to prepare for any possible future surgery (prehab).

Though a preventive bilateral mastectomy is not as traumatic as is, say, abdominal surgery, kickass gym workouts will get factored into your recovery.

Not all gym workouts need be strenuous, but aim for at least 50 percent of your exercises to be done at a heart-hopping, sweaty, breathless level.