Do Heavy Deadlifts Prevent a Sore Low Back from Yoga? 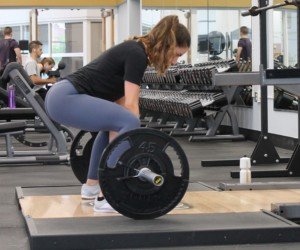 If you’re an animal with deadlifts, don’t think for a second that a single class of yoga won’t give you a sore back after the class or the day after.

There are different ways that physical fitness can be expressed, and deadlifting a lot of weight is one of them.

After all, the action of bending down to lift something heavy off the ground is one of the most fundamental movements of the human body, occurring quite frequently in the average person’s life, involving a connection between the upper and the lower body.

Heavy deadlifts will protect against back injuries that occur to so many people who are de-conditioned and do not know how to properly lift something heavy off the floor or ground.

Mastering deadlift form and pulling great loads will not protect you, however, from getting a sore back from yoga class.

The only thing that will stop back soreness from yoga is to keep practicing yoga, so that the recruitment pattern to the muscles that’s generated by the flows will become second nature.

As I write this I’ve taken 12 yoga classes; I’m still a novice. After class #12 my entire low back felt refreshingly opened up – and worked over. For the rest of the evening it was pleasantly sore.

Next day I still felt the worked-over muscles – worked in a way that pulling-weight exercises miss.

I do pull-ups, tire flips, squats, kettlebell swings and seated rows in addition to very heavy deadlifts, yet a single yoga class left my low back feeling that it was heartily challenged.

Twelve yoga classes are still too few to tell if this new discipline in my life will actually benefit my deadlifts, but even if it doesn’t, it’s tapping into my back muscle fibers in a way that the big compound moves are missing.

If you’re a beast with the deadlift and other big core-tapping moves, try a yoga class. See if your back isn’t sore right after or the day after.