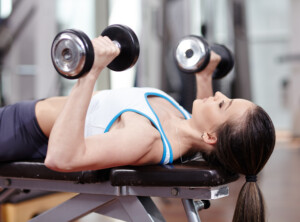 Endurance is sustained activity. If you’re using light weights for 20 repetitions, this may seem like endurance when you compare it to heavy weights of the same routine that you can only do eight reps for.

It may take longer if the set is grueling from the get-go. For instance, it can take a few minutes to get through 20 ultra-heavy leg presses. This is hardly a feat of endurance, however.

Jogging several miles is endurance. Sitting on a rowing machine and rowing for 20 minutes nonstop is endurance training.

Lifting weights, if done with weights light enough to just sit or stand there for 20 minutes, repeating the movement over and over, would qualify as endurance work.

But if after 20 reps, you’re “feeling it,” or have burned out muscles, and especially if you can’t do more than 20 reps (such as in the case of those punishing leg presses), then this is strength training.

Those 20 leg presses won’t do much for your ability to sustain a jog for 30 minutes or continuously run up and down a basketball court.

For a very challenging workout, choose a weight load that truly makes 20 reps barely possible, so that by the time you’re approaching 20, your muscles are piping hot.

I see many women merely going through the motions for many reps, perhaps afraid that they’ll bulk up if they use a resistance that’s more difficult to handle.

Another reason women (and some men) go through the motions with the high reps is because, quite honestly, it just hurts when you pump iron to muscle failure for higher reps.

This is called metabolic failure, versus the mechanical failure that kicks in for heavier lifts that you can do only six or eight times.

If you want endurance training for your upper body, take up martial arts or a cardio “strike” class at your gym.