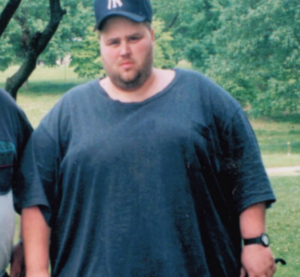 James as a young adult

“This is mind boggling why you keep overfeeding him!” Dr. Now scolds an enabler on “My 600 Pound Life.” Finally, Dr. Now lashes out at an enabler!

The Lisa and James situation aired for the first time on March 15, 2017.

Many “600 Pound Life” viewers seethe flames at the enablers, but Lisa has got to be one of the worst enablers I’ve ever seen on this show.

I thought Penny Saeger’s enabling husband was the worst, but Lisa takes the cake (no pun intended).

The subject is James, 46 (as of 2017), who’s confined to his bed and has grotesque pebble-like protrusions, lesions and other yucky stuff on his legs from cellulitis that is prone to draining.

I don’t mean to be cruel, but in all sincerity, James’ lower body looks like Jabba the Hutt’s.

Lisa doesn’t seem to mind wiping up the oozing every day nor having pulled their teen daughter out of school to help care for her father.

Because James is paralyzed by his weight, he is 100 percent dependent on Lisa for food intake, and she is shown bringing him plate after plate loaded with high calorie food.

About an hour into the two hour episode, Dr. Now really lays into her after James not only fails to lose the recommended amount of weight to qualify for the surgery, but he gains some.

• He’s not the softie he usually is.

• He corners Lisa by asking what would happen if she just stopped bringing him all the food.

• She replies, “I will have hell to pay for the rest of the day.”

• Dr. Now fires back something like, “What’s he gonna do to you while he lies in bed? Scream and yell? So let him scream and yell!”

Later on in the show, James is given yet another chance by Dr. Nowzaradan, and when he comes back for his next weigh-in, he’s UP by 158 pounds – after Lisa insisted that she kept James on the prescribed diet.

That’s when Dr. Now chastises Lisa: “This is mind boggling that you keep overfeeding him.”

And he’s so right: It is mind boggling how these enablers operate. Even after James suffered acute heart failure, that wasn’t enough for Lisa to stop bringing him platefuls of food. Every time he went back for a weigh-in, he had gained.

So Lisa, as well as other enablers, believe they will have hell to pay for the rest of the day should they refrain from overfeeding their 600-pound-plus significant others, grown kids or parents.

What is this “hell” when compared to the hell of playing a key role in CAUSING THEIR DEATH?

Are these enablers so thin skinned that they can’t ignore a temper tantrum that’s being thrown from the confines of a BED?

It was very refreshing to finally see Dr. Nowzaradan scold an enabler. He needs to go into scolding mold more often, even if it doesn’t snap the enabler out of their delusion.

But I’m betting that more times than not, it would. It’s just that in the James and Lisa case, it didn’t.

After 11 months, James and Lisa were finally turned away by Dr. Now, though the doctor had supported the idea of having two physical therapists drop by and help James sit up for the first time in a few years.

At the end James announced that he was determined to get under 600 pounds and get the surgery, but the only way this will ever happen is if Lisa stops being his enabler.

“My 600 Pound Life” takes the viewers back in time to the childhood of every subject, so that we can see what could have triggered the descent into 600 pound madness.

I’d like to see some of the footage that’s spent on boring travel preparation scenes be replaced by even just five minutes of exploring the childhood of the enabler.

Lisa is slowly killing her daughter’s father and enlisting in her help to do so. Sure, James could always say “No” to all the eating, but he can’t get any food without his enabler’s help.