MRI Breast Cancer Screening for Non-Dense Breasts? Why Not? 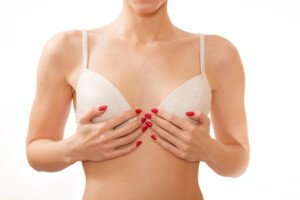 If the MRI is so sensitive to picking up cancer in very dense breasts, why shouldn’t women with non-dense or fatty breasts ALSO benefit from annual MRIs?

After all, MRIs can pick up a lot of things that mammograms (and ultrasounds) can’t.

Traditionally, the MRI has been recommended only for women at high risk for breast cancer.

The arrow in this breast MRI points to cancer. © Nevit Dilmen/CreativeCommons

With about 240,000 women in the U.S. every year getting diagnosed with breast cancer, why isn’t MRI as standard as the mammogram – even if a woman is willing to pay out of pocket and doesn’t mind lying inside the equipment?

Dr. Kuhl’s paper points out that MRI finds malignant tumors that mammography would eventually find – but that MRI detects them sooner.

The report also notes that if the MRI had not been done, those additionally-caught masses would have progressed to interval cancers.

Interval masses refer to those that the patient or doctor discover with the fingers in between imaging procedures.

The earlier that breast cancer is caught, the more curable it is. So why then, aren’t MRI’s routine for non-dense breasts?

“This study was evaluating average-risk women, meaning, those with background lifetime risk (12%, 1/8 over the course of their lifetime), with non-dense breasts and history of normal imaging,” begins Anjali Malik, MD, a board certified diagnostic radiologist with Washington Radiology in Washington, DC., who was not involved in the study. She interprets mammograms, breast MRIs and ultrasounds, and performs biopsies.

“Screening examinations are meant to be accessible, easy, quick, cheap tests with good sensitivity and specificity to detect a disease that, when caught early, is curable.

“This study clearly demonstrates the excellent specificity and sensitivity of contrasted breast MRI.

“However, the cost, limited accessibility (less centers, magnets and techs for MRI, length of time, even if abbreviated, due to IV placement, checking renal status), and risk (gadolinium contrast is not without risk) make MRI a poor screening examination for those with average risk.”

“Thus, it is reserved for those women with increased lifetime risk for the development of breast cancer, where MRI certainly has a place as part of a high risk breast cancer screening protocol,” says Dr. Malik.

For example, a woman with non-dense breasts but who’s positive for a BRCA mutation would be a candidate.

A woman with heterogeneously dense breasts whose sister was diagnosed with the disease would also be a candidate for MRI screening.

Dr. Malik is a frequent public speaker and advocate for breast health awareness. She has lectured on the latest advances in breast cancer screening including 3D Mammography™. Follow her on Instagram: @AnjaliMalikMD