Why Do Some Kids Foil Abduction Attempts and Others Don’t ? 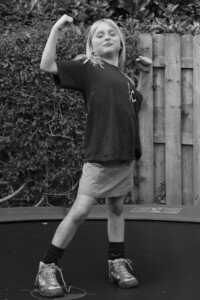 What’s unique about the child who’s able to foil an abduction attempt, vs. ones who never try?

Every once in a blue moon you hear about a child who wildly “fights off” an abductor and escapes, while most other victims obediently do everything they’re told as though paralyzed with fear.

Not all children react the same when confronted with a perpetrator—a stranger—who wants to abduct them.

Some kids are just feistier than others, prone to becoming angry rather than frightened. Anger allows a victim to fight back and make escape attempts.

Fear disables this function; the victim becomes quiet and obedient, non-resisting, and hence, nobody notices the abduction in progress, and once at the scene of captivity, the victim is too fearful to make an escape attempt despite opportunities.

Some children are not afraid to create a loud scene, while others in the process of being abducted are reduced to the quietness of a mouse.

A-nari Taylor, 7, wasn’t the victim of an abduction attempt. Her four-year-old cousin Brandon was.

But she was right there and jumped in: “I had to chop and kick him so he could let Brandon go,” the girl is quoted in an article at usnews.newsvine.com.

What would most seven-year-olds have done? What if the man went for A-nari first?

What if A-nari were the girl whom Phillip Garido grabbed instead of Jaycee Lee Dugard, age 11 at the time of her kidnapping?

Dugard was discovered 18 years later, still under Garido’s influence, and rescued. Since then, details have come out about her captivity.

Soon after Garido had confined Jaycee to his backyard, where she saw no physical way to escape, she began talking to the boy next door, separated by a fence.

Dugard has reported that she had been afraid to tell the boy that she was an abduction victim and to get help.

What would A-nari had done, had she failed to scare Garido off with the moves she put on Brandon’s would-be abductor?

And by the way, that man gave up the kidnapping attempt due to A-nari’s aggression.

Somehow, I just can’t picture A-nari passing up the chance to tell the neighbor boy to seek help.

In fact, I can easily picture her scaling Garido’s backyard perimeter which, based on descriptions, was actually climbable.

Some kids go very quietly with their abductor while others make fireworks. Is this due mostly to genetic hardwiring of their brains?

Or is it due mostly to upbringing, home environment?

Think back to your childhood. Did you know any kids who would have put up a loud, aggressive fight if grabbed by a stranger adult?

They want the task to be fast, easy and as inconspicuous as can be.

Abductions of children may seem like crimes of opportunity, and sometimes they are – the perp just happens to cross paths with a mousy looking child who has a non-confident gait.

But the reality is that predators won’t go near a tougher looking, more swaggering type of child – the kind who even looks like he or she can be quite bratty.

Why take the chance? The pedophile knows that an easier-looking child will come along soon.

“Victims of these types of crimes sometimes fit a certain profile,” says Robert Siciliano, CEO of Safr.Me.com and an expert in fraud prevention and personal safety.

“They may have few friends, be somewhat outcasts, lack self-confidence and have a meek or vulnerable disposition.

“Whereas children who exhibit confidence, are fully aware of their environment, question authority and aren’t easily persuaded are tougher targets.”

Of course, sometimes the predator grabs a fighter-type without realizing this until the victim starts creating a lot of commotion.

A small package with high energy is too much for the predator and he releases the victim.

Common sense says that drilling into your child that they’d “better obey all adults” or that they should “never question an adult” will set them up for becoming obedient to a predator – being whisked away and never seen again alive.

I have yet to hear of a case in which a predator murdered the child he was trying to abduct smack in a public place due to the victim’s wild and loud resistance.

Often, the kidnapping is actually a lure, and the child does not know this as he or she goes off with the predator—after the predator tells the victim, “Your mother is sick; she asked me to get you and take you to her.”

Older children will not so easily fall for this, and their abductions are more likely to be forceful right at the onset.

Somewhere along the way, these children — who foil abduction attempts — learned that they have power and that it’s okay to use it.