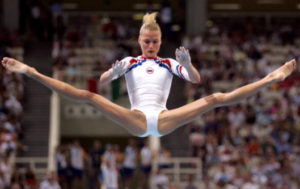 Ever wonder how much body type plays into being an Olympic champion?

Phelps’ leg length is suitable to a six-foot-even man, and his torso length fits a man 6-8, according to analysis of his body type shown at the 2008 Olympic Games.

According to the analysis, Phelps has disproportionately large feet and hands, which act as fins and paddles, respectively.

But get this: The world’s best male breast-stroker is only 5-10! I don’t know what his proportions are, however.

Maybe he, too, has an abnormally long torso relative to his total height, and relatively short legs.

I can easily see how the long torso and short legs can be an advantage in swimming, especially at the pool-end turnaround after completing a lap.

Imagine a swimmer with relatively long, long legs and this really short torso.

Those legs would create a lot of weight and drag during the stroking, and they’d slow down the turnaround.

But short short legs and a long torso? The swimmer wouldn’t have as much weight behind him to drag with him, and shorter legs (relatively to total height) would mean a swifter turnaround after the completion of a lap.

As a former personal trainer and lifelong athlete, “body types” have always fascinated me.

The term “body type” often refers to whether a person is an apple shape or pear shape, or a mesomorph, ectomorph or endomorph.

But there’s more to body type than these five aforementioned categories.

For instance, a person with a barrel chest and an arm span several inches shorter than his overall height will have a biomechanical advantage in the bench press – one of the three moves in the sport of powerlifting. 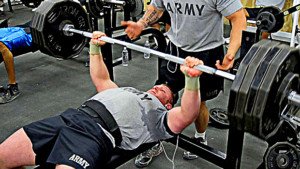 A person whose femur length is four inches shorter than her torso, and whose shins are two inches longer than her femurs, will have a biomechanical advantage in the back squat – another powerlifting move.

What about gymnastics? I’ve seen different body types here. Svetlana Khorkina is 5-5 but appeared to be all of just 90 pounds at the 2008 Olympics (see top image).

She was very thin; so thin that I wondered how she could land from the uneven parallel bars without breaking her spindly stick legs.

Gymnast Mary Lou Retton of Olympics past was muscular and thick, very compact.

And so was 2008 Olympian Shawn Johnson. Nadia Comaneci and Olga Korbut had builds unlike that of Johnson or Khorkina.

Male gymnasts’ bodies also vary; some look like bodybuilders, and others are a lot smaller, not even appearing strong enough to handle the still-rings.

Most stand in between these extremes, however, with varying sizes of biceps; some protruding like cantaloupes, and others more subdued.

Body types in figure skating also vary, from bony and very thin, to muscled and compact, to lean and lithe, to curvaceous, such as two-time gold medalist Katarina Witt.

Skiers with short torsos relative to their body height have an advantage; the relatively long legs provide a base of support while on the slopes.

Imagine a skier with this really elongated torso and “stubby” short legs – these proportions would create a balance and stability problem.

More specifically, the femur length needs to be shorter than the torso length.

However, more of a variety is seen in volleyball players. Some of the women are a little on the heavy side, while others are built like triathletes, all equally skilled.

Same with female basketball players; some are thin, some are solid, and some are a little pudgy. 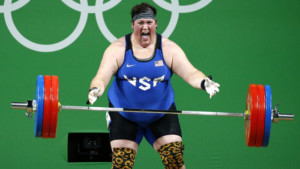 The logic behind this is simple. In Olympic style weightlifting, the athlete must pick a barbell off the floor and get it overhead.

Imagine how difficult this would be if they had these really long arms. That would mean a huge range of motion to move a heavy weight.

If they had “T-rex” arms – an arm span much shorter than their height – there’s be a reduced range of motion through which to move the weight.

At the next Olympics, tune into the weightlifting event and you will easily see, when the athletes are walking around, just how relatively short their arms are. And by the way, femurs must shorter than their torso are a must.

The third move in the sport of powerlifting is the deadlift. An Olympic style weightlifter wouldn’t do too well here, as an arm span LONGER than body height is the big advantage in the deadlift. 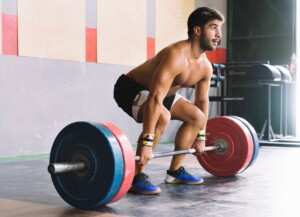 Great deadlifters often do poorly in the bench press (from a competitive standpoint).

Now you know which sports to encourage your kids to excel in, based on their limb and torso proportions.

For instance, if your child has femurs exceeding the length of their torso, you may want to encourage cycling or hard-style martial arts (both Olympic sports) rather than skiing.