Why Are Many Elderly Women So Alarmingly Thin? 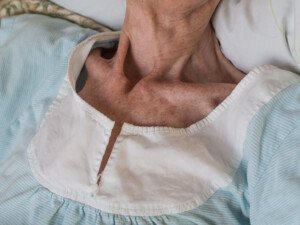 It’s said that it’s harder to lose weight as we age, yet many elderly women are too thin for good health.

So what’s really going on with this bizarre phenomenon?

If you’re thinking that the reason for what seems to be “scary skinny” bodies among the majority of very elderly women is due to overweight cutting lifespans short, you are mistaken.

Yes, overweight cuts lifespans short due to the many medical conditions that it leads to, but this doesn’t explain why being very underweight is prevalent among elderly – especially very elderly – women.

“It does seem that many elderly women are shockingly thin, and there are several explanations,” says Stacy Mitchell Doyle, MD, resident physician of FoodTherapyMD and long-time advocate of plant-based nutritional protocols.

“First, as you age, appetite decreases and your sense of taste and smell also lessens, so there is a natural tendency to lose weight,” says Dr. Doyle.

However, there’s more to it than that, because you’d think that as we age, we’d be aware of this phenomenon and make efforts to compensate to avoid becoming unsightly underweight.

“But also, may older women appear so thin because of a loss of muscle mass, which causes a very frail appearance,” adds Dr. Doyle. 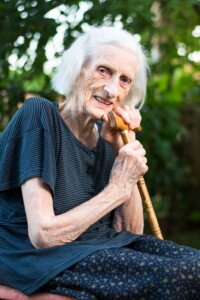 –  Women who don’t strength train will lose significant muscle mass by the time they’re 75 … to the tune of five pounds per year beginning at 30.

–  Not eating enough (which in some cases can be caused by medical problems and depression) lowers the fat volume.

–  If caloric intake is low enough, the body will feed off its muscle, further reducing muscle mass.

Put that all together and you get an alarmingly thin and frail elderly woman.

When older people eat, their body cannot make muscle as quickly as in a young body, say researchers from the University of Nottingham.

The body should be making muscle from the protein in food, and in people over 65, this process is suppressed.

Have you ever seen a very thin elderly woman (or man) training with weights at your gym?

I don’t mean a newcomer with a personal trainer who’s for the first time learning what to do with a two pound dumbbell.

I’m talking long-time workout enthusiasts. The long-timers or veteran gym-goers, who are in the elderly age range, have pretty decent looking physiques. 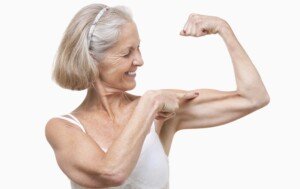 Some may be plump, but you can see more muscle mass than what’s present in their same-age, non-weightlifting peers.

In older people, this protective mechanism doesn’t happen. A poorer blood supply may be responsible.

For an experiment, “We tagged one of the amino acids (from which proteins are made) so we could discover how much protein in leg muscle was being broken down,” explains Michael Rennie, professor of clinical physiology at Nottingham, in a report in The American Journal of Clinical Nutrition.

“The younger people’s muscles were able to use insulin we gave to stop the muscle breakdown, which had increased during the night,” says Rennie in the paper. “The muscles in the older people could not.”

Blood flow in the leg was greater in the younger subjects as well. Rennie speculates that the rate of nutrient and hormone supply is lower in elderly people. “This could explain the wasting we see.”

Solution #1  to Underweight in Elderly Women (and Men)

Beth Phillips, a PhD student working with Rennie, showed in separate research that strength training can help resolve the problem.

Three weightlifting sessions a week over 20 weeks restored blood flow responses, making them very similar to those in the younger adults.

Solution #2  to Underweight in Elderly Women (and Men)

“The fix is more protein, but not animal protein,” says Dr. Doyle.

“Consuming high protein plants such as beans, soy, legumes, broccoli, peas, whole grains, quinoa, avocado, will not only help build muscle, but the phytonutrients in these foods will also slow the aging process inside and out.

“In addition to diet, weight-bearing exercises and resistance training also help maintain muscle mass,” and as a former personal trainer, the top five strength training exercises that I recommend for senior age people are the leg press, some variation of squat, seated row, bench press and deadlift (shown below). 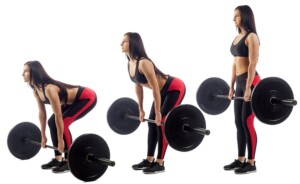 Deadlift execution: 1) With proper form, get into the lifting position, 2) Rise up, keeping shoulders above hips at all times, arms straight, to a complete standing position while holding the barbell. Shutterstock/Everyonephoto Studio

You really don’t need science to explain the obvious. Look at the 50-something people at your gym who train seriously with weights.

Now imagine what their physiques will look like 20 years from now. If such individuals continue strength training over the next 20 years, I just cannot—for the life of me—imagine that by then, they will look thin and sickly.

I cannot see the extrapolation or deduction when looking at them presently. I’m not talking about the middle-agers who don’t train all that hard.

I’m talking about the very serious ones who look quite impressive for their age.

They are not going to end up in the same boat as their same-age counterparts—who don’t strength train—20 years from now. It’s just not logical.

Younger women who are “skinny fat” and who will never take up serious strength training are looking at their golden years sporting an alarmingly thin, sickly body.