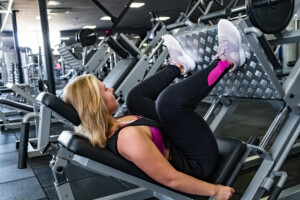 Partial reps on the leg press machine when done deeply will burn fat and strengthen the legs when done according to the following instructions.

Lower the sled as deeply as possible without letting the lower back lose contact with the seat.

The knees should not rest on the chest. To avoid the problem of the chest getting in the way, place feet far apart, and keep knees tracking over the feet; don’t let the knees buckle inward.

Now you can lower the sled deeply, knees on either side of your chest. Press back up but stop when your legs are a little past a 90 degree bend, maybe around 100 or 110 degrees. Then lower.

Each repetition never goes beyond a 110 degree angle at the knee. Thus, the “top” of the movement is actually what would be the “bottom” of the movement for the way most people do this exercise.

Most people lower the sled to halfway (or a little more), then press back up, sometimes nearly locking their legs out straight. Thus, the “bottom” part of the movement is the 90-110 degree bend.

If you make the bottom part right where your chest is between your knees because of the deepness of the eccentric portion, and then press up to make the “top” part the 90-110 degree angle, this will subject your legs to significantly more tension, and it can be quite brutal!

Keep feet flat on the sled; never push with the balls. The trick is to figure out what load incurs a raging burn within 10-12 reps.

You may inadvertently select a load, initially, that’s too heavy and find you can’t go past three reps.

Don’t be surprised; this leg press partial rep technique requires a much lighter load than the more common way of pressing, which I just described.

Find that sweet spot: the load range that lashes your legs with fire within 10-12 reps. Take a 45 second rest, then repeat.

Do six sets total with 45 seconds in between. You’ll probably need to decrease the reps by the third or fourth set.

At the end of the six sets, there should be a film of sweat on your legs, even arms.

The load should be such that it’s a major struggle to get through this routine.

Though the weight load is much lighter, this technique will develop strength, not to mention burn fat like mad due to the intense time under tension.

Six sets, 45 seconds in between, 8-12 rep max (give or take), partial reps: a serious fat burner and leg shaper that beats anything in a bottle.

You’ll never go back to going through the motions ever again.