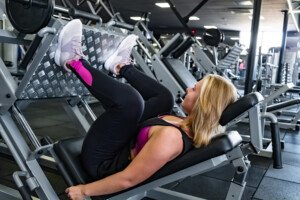 If you want to burn the fat off your thighs, forget the inner-outer machine and do LEG PRESSES.

The leg press machine, when used a certain way, will melt fat right off your legs.

The resistance is set so light that they’re able to rock the sled back and forth with little effort.

Or, if it’s a heavier load, the range of motion is set small.

Need I say that I never see these exercisers showing any kind of strain. Now don’t think that “strain” is a bad thing.

There’s nothing wrong with straining when you don’t have a medical condition in which straining could cause a problem, such as uncontrolled high blood pressure.

It’s also important to note that men, too, are capable of going through motions on the leg press apparatus.

But oddly, this scene almost always involves women. Perhaps they believe that making the exercise harder will bulk up their legs with chunks of muscle.

Don’t believe this for a second! This device can be used as a fat burner that shrinks big thighs.

Another trend is that personal trainers don’t gravitate towards this simple piece of equipment for their clients who want to burn fat.

Instead, many trainers these days have their clients (of varying fitness levels) standing on one foot and curling dumbbells, or doing some other gimmicky movement.

The leg press is old, simple, basic and very effective. It’s time to bring it back to the forefront for women seeking fat loss, fitness and better looking legs. 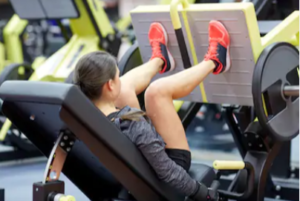 The best equipment that works best for blasting fat is the floor version, also referred to as the 45-degree version.

The seat is on the floor, and the trainee’s back is inclined back, close to the floor (the angle can be adjusted). With this version, you are pushing upward against resistance, rather than horizontally.

Even the most out of shape person can do this exercise. If you don’t think you can independently enter into the apparatus or independently exit it, give it a try and you’ll be surprised at your abilities.

Don’t avoid this fat burning equipment. Once you’re settled in, you can press the sled, even if you’re weak, obese and totally out of shape.

The seat stabilizes the lower back, so even those with “bad backs” may find this equipment quite doable. 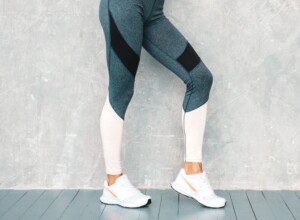 • Lower the sled as close to your chest as possible.

• If your stomach gets in the way of this, place your feet further apart so that your knees clear your midsection.

• Do not let the knees cave in or buckle towards each other, especially when pressing the sled back up to the start position.

• Start out with light weights if you’re new to this machine.

• Do not lock your knees out at the top of the movement; keep a slight bend.

• After several weeks of getting used to the exercise with light weights, increase the weights.

• The goal is to set the weight heavy enough such that it’s absolutely impossible to do more than 12 repetitions, but you can do at least eight.

• Take about a minute in between each set.

• Include sets where the start position is with your legs fairly bent. This technique is called partial reps. Bring the sled down deep, then push back up but STOP at this lower position.

• Do six to eight sets total. Your legs should feel fried at the end of the routine.

For best results with the leg press to burn fat off your legs, use this machine no more than twice a week.

Once a week is actually sufficient to cause fat loss.

And remember, if the routine isn’t very challenging, you won’t get good results.