Can A Woman with Prominent Collarbones Be Healthy?

Prominent clavicles are beautiful and in many women indicate a healthy body fat percentage, not an eating disorder!

I was inspired to write this article (finally) after seeing quite a few episodes of “The Golden Girls.”

The character of Blanche, played by Rue McClanahan, often wears dresses revealing her entire shoulders—including the clavicles—or shall I say, lack thereof.

I’ve always thought of how unattractive this was; no landscape, no definition, just one solid mass of mush.

Then one day I had a freak fall and broke my collarbone. It healed and one day I realized I could hold water in the depression that my clavicle borders.

I then did some googling and, to my surprise, learned that several years ago a fad apparently originated in Weibo, China, in which women were placing coins on top of their collarbones—a sign of thinness.

The critics soon chimed in, stating that this was yet another fixation of a skinny-obsessed culture, promoting eating disorders and unhealthy body weights.

Check out my very visible clavicles to the left, as the image at the top shows. I am very healthy and fit, a former personal trainer.

I do fierce gym workouts with very heavy weights, plus intense interval cardio. I go on long hikes and feel great afterwards.

Having very little fat around the clavicles doesn’t mean a woman isn’t healthy and fit. 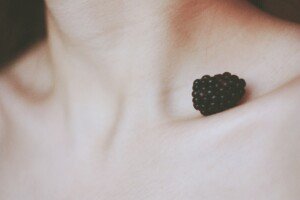 In fact, with all the heavy weightlifting I do, my clavicles (like the rest of my bones) are dense and strong, since weight-bearing exercise stimulates bone growth.

Granted, we all know that there are thin women who don’t get enough nutrition and have weak, untrained muscles—whose collarbones show prominently.

But the prominent visibility of clavicles, in and of itself, should not be a marker for being unhealthy or underweight. 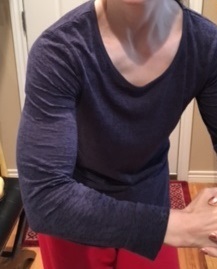 Now take a look at the shoulder and arm that goes with my prominent clavicle, and tell me if you think I’m undernourished, weak and unhealthy.

Do not be alarmed if your clavicle bones show. If you’re concerned about health and fitness, start lifting weights and increase your intake of fruits, vegetables, nuts and fish.

Weightlifting will increase your bone density and strengthen your musculoskeletal system. 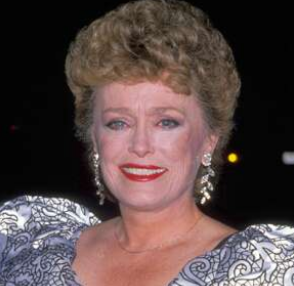 This points towards the so-called skinny-fat body: a body that fits into a size single-digit dress, but the body composition is a higher ratio of fat to muscle.

According to the American Council on Exercise, a body fat percentage of 14-20% in women is considered “athletes.”

Prominent collarbones, hence, do not mean a woman has an eating disorder or is too thin, even though a too-thin woman may have protruding clavicles, and even more commonly, simply visible clavicles.

There is nothing wrong with women proudly sporting their clavicles. A padded layer of fat over them will not necessarily make such a woman healthier.

Doctors do not assess health, during a routine physical, by examining the visibility or prominence of collarbones.

Instead, doctors note your blood pressure, fasting blood sugar, listen to your heart, examine your mouth and conduct other classic tests for health and well-being.

The clavicles of many professional or competitive female athletes who have very healthy diets are frequently prominent.