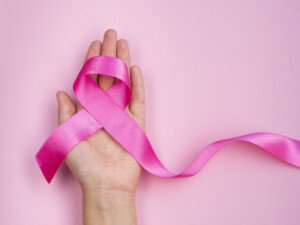 There may be good news for women worried sick over cancer due to their dense breasts.

The Radiological Society of North America met Dec. 2, 2015. And the RSNA concluded that dense breasts are not a strong risk factor, in and of themselves, for breast cancer.

There’s a lot of information out there that translates to: Extremely dense breasts (and even heterogeneously dense breasts) are an independent risk factor for cancer, and that there’s nothing that a woman can do to alter this anatomical makeup; she’s stuck with it.

To add salt to the wound, tumors can go unnoticed on a mammogram, because they resemble normal fibroglandular breast tissue; both appear white, and the more dense a breast, the more likely that a tumor can be camouflaged.

Due to these factors, a woman with dense breasts are sometimes advised to get additional screening via ultrasound or MRI.

So what’s the good news with this new study?

“In our study, we found that there was no significant difference in breast density between breast cancer patients,” begins Natasa Katavic, MD, “and the control group in the screening program.” She’s from the Department of Radiology at Health Center Osijek in Croatia.

How many women were involved in this study?

Data from 52,962 mammograms of patients 50 to 69 was analyzed over five years at five separate mammogram clinics.

The purpose was to learn if women with breast cancer had more dense tissue than those who were healthy.

“Also, we wanted to see what the percentage of dense breasts was in our postmenopausal population,” says Dr. Katavic. She aimed to come up with a value for mammogram screenings for this group.

The mammograms were read by two radiologists who rated the breast density. Then, the data was compared between women who had low density and those who had high.

Most of the screened patients had low breast density. There were 230 mammogram-detected malignant tumors.

Of that 230, nearly half came from the group with the lowest density ranking. A bit less than three percent of that 230 came from patients who had the highest ranking.

The researchers matched women with cancer, as found on mammogram, with same-age and same-locale women who were healthy, and did NOT see a significant difference in the density.

In the group who had the detected cancer, 83 percent had low density. In the control group, 89 percent had the low ranking.

However, high density was present in 17 percent of the detected-cancer subjects, while this figure was 11 percent in the control group.

No strong link was discovered between having a high ranking and a higher risk of BC in postmenopausal women.

So here is what Dr. Katavic states: “Our study suggests that breast density alone might not be strong independent risk factor for breast cancer.”

She advises that all risk factors must be taken into consideration before recommending additional screening procedures to women.

Some Fair Questions About the Study

#1. Is it possible that what appeared to be malignancies on the mammograms (in women of any ranking) could have been benign growths?

After all, a mammogram only detects possible cancer; it is not a diagnostic. The official diagnosis comes from a biopsy of breast tissue.

I’d like to know how much the stats would be altered if all of the suspicious masses were biopsied.

#2. Where was this kind of study several years ago, when alarm about breast density first was surfacing? Why only NOW are these encouraging results coming in?

#3. Will similar studies, especially larger scale, be conducted in the near future? Does this study pave that way?

#4. Were other variables adjusted for, such as family history, hormone replacement therapy, body fat, diet and exercise habits, drinking, and lesser-publicized risk factors for breast cancer, such as working a night shift?

#5. Is there an explanation for why the results of this study contradict the alarming information from other reputable medical sources, such as these?