5 Ways to Stop Screaming Kids in a Power Struggle 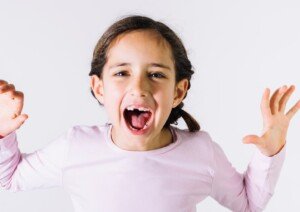 If you’re child screams when you say “No” or don’t give him or her what he wants, there are five clever solutions for this problem.

This article is about kids who scream because they are mad, upset, don’t get what they want, are demanding, etc., versus kids who scream out of delight, excitement, fear (seeing a spider) or during play. In other words, the screaming of a temper tantrum.

Michelle and Paul Shelton have five kids. She advises do not ignore the screaming child, because to do so, fails to teach appropriate behavior.

But not ignoring the screaming child is NOT the same as giving in to the temper tantrum.

If a screaming kid wants candy, you can still tend to them without giving them the candy. But the tending, here, is to teach NOT to scream.

Michelle says on parentingideas.org, “Tell the child in a calm, level voice to stop raising his voice. Put your index finger firmly over his mouth and set him somewhere out of the way. In our household we use the bottom step of our stairway.

“The child must go sit on the step until they are ready to ask in a nice voice just what it is that they want.

“The child is always in control of the time frame. It is their decision to stop screaming and ask nicely.

“As a parent, you are there for guidance. You are simply making it inconvenient for them to scream.

“This is incentive for them to change their own poor behavior and it avoids power struggles.

“If they get up from the step and they are still screaming…take them back and sit them there over and over until they get it.”

You might be thinking, why not just spank the kid; wouldn’t that be easier, since Michelle’s technique might require an “over and over” approach?

Well, guess what: Spanking, too, is just as apt to require an “over and over” approach.

Though a spanking might initially stop a child from screaming, it’s likely the loud bellowing will recur; if not that day, then the next day, and you’ll then think, “Well, I just have to keep spanking him till he gets the message.”

In other words, this is the very over-and-over approach you perhaps didn’t want to do with Michelle’s method!

Spanking or hitting kids has the vast potential to cause adverse effects down the road (and I don’t mean the kid will grow up to be a serial killer, but hitting kids often produces an assortment of ill-effects such as a gruff, disgruntled demeanor; the propensity to physically strike out at pets; physical abuse of a spouse; low self-esteem; and if not any of those, then certainly, a disgust and sometimes estrangement of the parent who hauls off and hits), even though hitting may solve a screaming problem.

Michelle’s technique can be just as effective in terms of correcting screaming, yet at the same time, won’t cause negative effects in kids.

The next technique, which comes from a former coworker of mine, might have you bug-eyed and wildly shaking your head in disagreement. But if you’re at wit’s end, it might be worth a try.

Her daughter had a habit of throwing temper tantrums at the store. The mother had tried a number of methods, including spanking, but subsequent shopping trips brought out the screaming all over again in her child.

The mother decided she was just going to have to ignore reactions from other shoppers.

Her daughter almost instantly ceased the hollering and stared shocked at her mother’s performance. The child never screamed or threw another temper tantrum after that.

Do not give in to the screaming.

Otherwise this will reinforce the screaming, i.e., increasing the odds that the hollering and shrieking will happen again and again: basic Skinnerian psychology.

Keep making this insistence: “I can’t understand screams, but I can understand words. Use WORDS. Don’t use a begging tone of voice; use a matter-of-fact but firm voice.”

One parent suggests making sure your child knows where the “scream zones” are (such as the park, in the basement, at the beach in the water, at the swimming pool).

Next time your child screams in a forbidden place, remind them of the scream zones and ask to tell you where those zones are.

Margaret Paul, PhD of Child-Central.com, offers an interesting idea, but it should only be done inside the house, and ideally, you should be wearing ear plugs.

She says next time your child erupts into screams (again, not out of fear, physical pain or joy upon seeing a beloved dog), but rather, screams of “I WANT IT NOW!” tell your child that he or she is not screaming loud enough.

“You have to scream louder; I can’t hear you very well. Scream louder.”

But repeat the request. It won’t be long before she decides she’s not going to holler at your request anymore.

This is because, besides from being exhausted, the child will come to realize that screaming actually doesn’t work.

Furthermore, says Paul, shrieking out of demand is a form of power struggle between child and parent. If the parent continues requesting that the child scream, the child, wanting to win the power struggle, will ultimately disobey the parent by NOT screaming!