At What Age Should Kids Stop Screaming While Playing? 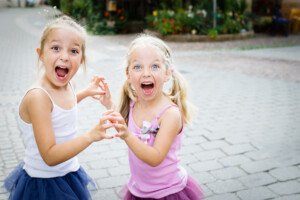 At what point are kids too old to be screaming during play?

What’s that cutoff where it goes from magical to obnoxious?

Some people can’t stand the sound of screaming kids, yet they may seem like the oddball because many parents don’t mind hearing ongoing screaming coming from their kids during play.

I’m not referring to temper tantrums or screaming that results from a painful mishap.

This is about screaming during play. It’s perplexing that some parents do tolerate this and don’t enforce a No-Scream rule.

The parents’ reasoning is that kids should be allowed to express themselves, to be free spirits, to enjoy their childhood.

But according to this reasoning, parents should also be letting their kids do whatever else they want to do in the name of being carefree and expressive, right?

Screaming is a very disturbing sound to have to listen to, even if it’s during play.

Imagine what an ear sore it would be if one of your adult neighbors and a few of his or her buddies began yelling and hollering nearby your home while they were playing touch football, Frisbee or having a water fight. And it was ongoing. On most summer days.

You’d never be able to tolerate it. You’d shut your windows. You might even investigate and ask them what’s going on: “Could you folks kindly quiet down?!” You might even call the police and report a disturbance.

Yet at the same time, you might think it’s perfectly acceptable for little kids to scream during play — even though it’s the same sound except higher, with a shrill component.

Why should people be expected to tolerate the screams of children, but not those of adults or even teenagers?

Imagine several teen girls screaming up a tornado near your house as they goof around and have fun.

You’d never think, “Oh, kids are kids, let them express themselves and have a good time.”

Instead, you’d think, “Geez, haven’t their parents taught them manners? Can’t they act civil? Those kids are so rude and inconsiderate!”

A scream is a scream, a very disturbing sound, be it from a young child, teen, young adult or middle-aged person.

Imagine a group of middle-aged men screaming with delight as they party outside. You’d go nuts and call the cops.

So how old is too old for children to scream during play before it becomes something that you would complain directly to the offenders or to their parents? What’s the cut-off age? Ten? Twelve? Fourteen?

I taught my kids never to scream during play from a very early age. This rule became built-in, just like other rules, such as not throwing food down on the floor.

How refreshing it was to know that no boy could make my daughters scream when chasing them with a rubber mouse.

There shouldn’t be a cut-off age because no age should be young enough for screaming during play to be acceptable.

Again, we can expect screams when little fingers get accidentally banged by a door. But during PLAY?

Just like you wouldn’t allow your kids (hopefully) to curse and cuss and talk like a sailor, why should you allow them to scream?

I’m not suggesting that kids should be as quiet as mice when playing. But there is absolutely no excuse for 100-plus decibel shrieks and prolonged screams, especially ongoing through two hours of play.

Many of these screams sound like someone is being forcefully abducted, trapped in a fire, being mauled by a dog or beaten by a parent. I’m not talking about laughter. I’m talking about SCREAMING.

On the TLC show, “7 Little Johnstons,” Amber, mother to five children, admitted that one day she heard a few of her young kids screaming in the backyard. To paraphrase, she stated, “It was several minutes before I realized they were screaming because the shed was on fire.”

Kids can be taught to play at reasonable volumes, even games of tag and water fights.

If you don’t believe kids can be taught self-control, visit a quality martial arts school and sit in on a children’s class.

It’s funny how parents go at far lengths to make sure their kids learn to say “please,” “thank you,” and other polite verbiage, yet at the same time, these parents will think nothing of permitting their children to emit shrill, ear-piercing screams during play.

Making these shrieking, ear-splitting sounds is not a requirement for having fun and being expressive.

A No-Scream rule will teach kids self-discipline and to scream only when there’s an emergency.