Can a Binge Eater Eat Himself to Death? Yes, in Case of Rare Genetic Disorder 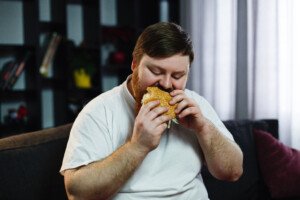 There is a genetic defect that is estimated to afflict one in 5,000 obese people. It is NOT called “binge eating disorder,” even though those afflicted will binge-eat every chance they get.

It’s believed that currently, about 12,000 U.S. people have been diagnosed with Prader-Willi syndrome.

It’s also assumed that a number of people are walking around with this affliction and have not been diagnosed at all.

The hypothalamus in the brain regulates hunger. It tells you when your stomach is beginning to get full with food.

You begin feeling this sensation of fullness as you continue eating. At some point, eating becomes undesirable and you leave the table.

In compulsive overeating, or a person who is receiving the wrong environmental cues to eat (such as being constantly offered food; boredom; socializing; seeing other people eat), the person may very well feel as full and satiated as the next person, but continue eating anyways.

It may even feel quite uncomfortable, but they continue eating because of some emotional or social need that is over-riding the physical need to eat.

Imagine, however, the hunger that a starving child in a developing country feels day in and day out.

This kind of hunger makes these kids, and adults, rummage through garbage cans for food.

They’ll eat anything, including rotting fish washed ashore from the banks of a filthy river.

Well, this is the kind of hunger that a victim of Prader-Willi syndrome feels, because the mechanism in the hypothalamus that controls hunger doesn’t work.

So no matter how much food they consume, they always feel starved and famished, as though they haven’t eaten for days.

This feeling is continuous, no matter how much they eat, which is why they are capable of eating themselves to death. They live in a state of never-ending starvation mode.

There is no cure for PWS. If there were, there’d be a way for chronic dieters to stick to a diet without any problem.

You may be wondering why someone with PWS just doesn’t learn to put up with the hunger.

After all, “normal” people can put up with hunger without any problem (long plane rides, being tied up in business meetings all day, other jobs that are demanding, and of course, hunger from dieting).

But apparently, the hunger in PWS is unlike the hunger that normal people experience.

If you ask a person with PWS what their hunger feels like, their description won’t help us understand too much, because they have never experienced satiation—except when they were too young to remember, as the raging hunger usually kicks in between ages two and five years.

Some will even consume whole bottles of vegetable oil, sacks of flour, raw meat and other foods in unprepared form.

You would eat this stuff, too — if you were in a plane wreck in the mountains and without food for five days and saw no rescue team in sight.

Other characteristic traits include short stature, distinct facial characteristics (though they can be subtle) poor muscle tone, underdeveloped sex organs, a stubborn and sometimes belligerant nature, aggression, and an uncanny talent for putting together puzzles.

Some people with PWS are mainstreamed in normal educational systems.

Food in their homes must be under lock and key. Even those with normal intelligence must have food locked away.

There are group homes for adults with PWS in which food is locked up, and doors and windows are secured so that they cannot escape in the middle of the night to seek food.

Or, doors and windows are equipped with an alarm so that caretakers know when someone is sneaking out. With 24-hour supervision, a person with PWS can maintain a healthy body weight.

Some people with PWS are completely out of control with the food seeking, while others truly try to work with their caretakers and work hard to resist the temptation to eat more than they should.

There is no proof that every single person with this diagnosis needs 24-hour supervision to prevent food foraging.

I myself have seen a video of a woman with PWS who lives semi-independently; in the evenings and overnight she is alone in her apartment with unlocked cupboards and an unlocked refrigerator, but is able to avoid uncontrollable eating. But this is an extremely rare case.

A “traumatic” version of this disease exists called traumatic Prader-Willi syndrome, in which a normal, healthy person develops a tumor affecting the hypothalamus. Surgery to remove the tumor results in damage to the hypothalamus.

The person is then permanently left with an insatiable appetite, and their behavior is very similar to genetic PWS, in which their eating becomes out of control.

Thus, a formerly thin person, who then suffers traumatic PWS, becomes morbidly obese, and food must be locked up out of his or her reach.

Often, they end up in PWS group homes with people with genetic PWS. And even though a person with traumatic PWS may have normal intelligence and no behavior problems, the overwhelming sensation of starvation is just too much for them, and they are unable to live a normal life.

The people you see on “My 600 Pound Life” do NOT have Prader-Willi syndrome.