Can a Gallbladder Polyp Turn Into Cancer? 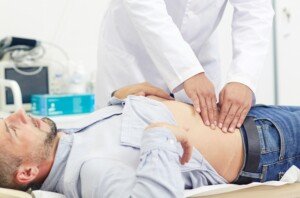 There are different kinds of gallbladder polyps and this includes cancer.

So if it’s been discovered that you have a polyp in your gallbladder, should you panic and assume that it’s cancer?

Will the mass eventually transform into a malignancy?

There are no grounds for panicking or making this assumption, as there are several types of polyps associated with this organ.

A Polyp Was just Discovered in Your Gallbladder

“Gallbladder polyps are outgrowths of the gallbladder mucosal wall that are usually found incidentally on ultrasonography or after cholecystectomy,” says Akram Alashari, MD, a trauma surgeon at Geisinger Medical Center in PA, and author of “THE POWER OF PEAK STATE.”

Don’t be unnerved by the “oma” suffix here. “Oma” is the medical term for mass—but the mass can be benign.

“The most common benign neoplastic lesion is an adenoma, a glandular tumor composed of cells resembling biliary tract epithelium.

“It is unclear whether adenomatous polyps represent a premalignant lesion and if so, the frequency with which they progress to carcinoma.”

Cancer-related molecular changes that are seen in gallbladder cancers have not been identified in adenomas.

“Nevertheless, larger polyps are more likely to contain foci of invasive cancer, and some studies suggest a correlation between the presence of gallbladder polyps and the risk of gallbladder cancer.”

Risk factors for this disease include aging, female gender and a history of gallstones.

However, the disease is still rare in people who’ve had gallstones.

Another risk factor is infection of this organ.