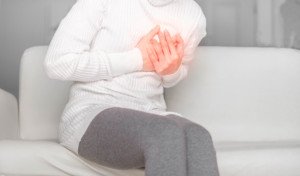 A doctor explains the three ways that GERD (acid reflux) can cause shortness of breath.

“Shortness of breath,” when it comes to GERD or acid reflux, is more accurately referred to as labored or difficulty breathing, or a sensation that the airway has become constricted.

So it’s not the same “shortness of breath” that you feel after running up two flights of stairs or chasing after your dog.

“Gastroesophageal reflux followed by regurgitation and/or aspiration of gastric juice has been associated with several extra-esophageal complications including asthma,” says Akram Alashari, MD, a trauma surgeon at Geisinger Medical Center in PA, and author of “THE POWER OF PEAK STATE.”

He explains, “Two major mechanisms of reflux-induced asthma have been proposed: aspiration of gastric contents into the lung with consequent bronchospasm.

“Reflux-induced activation of a vago-vagal reflex arc from the esophagus to the lung causing bronchoconstriction.”

And of course, there’s LPR:

Dr. Alashari explains, “Otolaryngologic manifestations of GERD can result from the esophagopharyngeal reflux of gastric contents with subsequent contact injury of the pharyngeal and laryngeal mucosa.

“The term ‘laryngopharyngeal reflux’ has been used to describe this process.”

So those are the three mechanisms through which GERD can cause trouble breathing or the so-called shortness of breath.

“Non-medical therapy includes behavior modification such as ingesting smaller meals; avoid eating within about three hours of sleeping and two hours of exercise; avoid distention of the stomach with excessive fluid during or soon before exercise.”

Finally, to impose more of a control on overnight acid reflux and help prevent nighttime breathing difficulties, you should try a wedge pillow that elevates the torso. 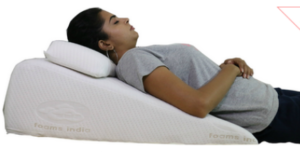 Elevating only the head with an extra pillow or two will not be effective.

Your torso (where the stomach and esophagus are) needs to be propped up at an angle so that gravity assists in keeping acid from refluxing.