Melanoma: How Not to Let This Deadly Skin Cancer Get Past You 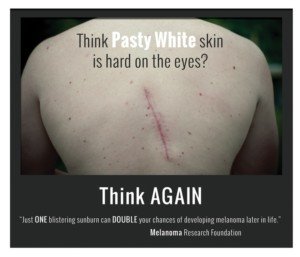 There’s a disturbing case of a young woman who let melanoma skin cancer get past her, and as a result, she died. But it didn’t have to be this way.

Melanoma kills about 10,000 Americans every year. This skin cancer kills by spreading to organs.

But melanoma has a near-100 percent cure rate if caught early. All a person needs to do is check his/her skin for suspicious moles.

Sounds simple enough, but many people will see a suspicious mole and make excuses not to see a doctor. I one day read about a woman with melanoma, and the poor service by her doctors was alarming.

This young woman with melanoma died, and it’s impossible to rule out that this cancer death can be traced back to inept doctors.

If you have a mole removal, there are things you absolutely must know:

In the case of the melanoma death, the patient wanted mole removal for cosmetic reasons. She was 14 and the mole was on her back/shoulder area.

About six years later the scar from the mole removal began itching and bleeding.

A doctor diagnosed an infection and prescribed antibiotics. He didn’t even scrape a tissue sample for biopsy.

If I recall the magazine article correctly, I think it was this doctor who found a swollen lymph node in the woman’s neck and thus, she saw another doctor for that.

In this next exam, the doctor was suspicious about the mole removal scar and had a sample tested for cancer.

Steps to Take for a Favorable Outcome

A favorable outcome is far more likely if a patient or patient’s parent always adheres to this rule:

If something is removed from the body, insist that the doctor send it to a lab for a biopsy, REGARDLESS of what the doctor thinks it is.

Do not let a doctor’s assurance of, “Oh, it’s nothing to worry about,” con you into passing up a biopsy. Over a million people in America every year are diagnosed with skin cancer.

In the case of the young women with melanoma, though this was six years before the area started showing symptoms, it’s possible that a biopsy would have revealed atypical or abnormal cells: a red flag for future cancer.

The doctor should have taken it upon himself to send the mole and skin tissue to a lab, whether or not the patient requested a biopsy.

It was later learned that the doctor had thrown out the tissue instead!

Another problem is that many people are afraid to question a doctor or make sure a doctor does A, B and C.

When I had a patch of skin scraped for biopsy, I jokingly said to the doctor when I saw her pick up the little container that had the tissue, “Oh, make sure my full name is on there!”  (The result was benign.)

WE ARE THE CUSTOMER. We are paying the doctor for a service. We have as much right to question a doctor and make sure he does A, B and C, as we do the people who are building a house for us, or laying in our new carpet, or putting in our new furnace, or fixing our car’s engine!

Take a good look at the different melanomas below. 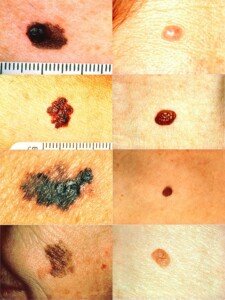 The person who wouldn’t hesitate to oversee what a mechanic is doing to his car might be the very same person who’s afraid to ask a doctor lots of questions!

If a mole is changing, suspicious, or the mole removal scar is doing strange things, FIRST THINK MELANOMA. Do not think anything else.

When you first think melanoma, you then can’t help but act accordingly, in that you will demand a biopsy rather than settle for a benign diagnosis.

Yes, we’d all like to hear it’s just an infection. But unless you have that biopsy, you cannot rest assured it’s not melanoma.

I can’t believe a doctor could look at an itching, bleeding scar and exclude melanoma without a lab test.

Though nobody likes to automatically default to an “It’s melanoma” mindset, this is what MUST be done. The next step is see a dermatologist ASAP and insist on a biopsy to rule out melanoma.

No. 1 course of action when a mole removal scar, or mole, itches and bleeds: SEE IF A DERMATOLOGIST CAN RULE OUT MELANOMA  —  and not with a visual inspection, but with a BIOPSY.

Always assume the worst, and then work backwards from that worst-case scenario. This is the difference between life and death.

“With melanoma there is no guaranteed way to make sure it does not get past you,” says Dr. Janet Prystowsky, board certified dermatologist in New York, NY, with 30+ years’ experience.

Nevertheless, it really pays to become very acquainted with the warning signs of this disease.

In combination with her focus on early skin cancer detection and removal, Dr. Prystowsky provides a wide range of revitalizing and rejuvenating treatments.