Do Child Karate Experts Ever Get Bullied? 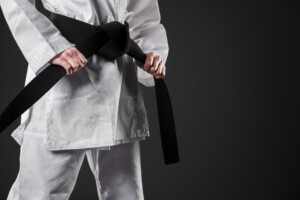 I’ve trained for years in the martial arts, but I’ve never run a martial arts school, so I decided for this article to consult with someone who does, to get the master instructor’s take on bully-proofing children via martial arts training to the black belt level.

“Everybody has the potential to be bullied, even martial arts black belts, since bullies typically do not respect titles or accomplishments,” says Jarrett Arthur, one of the highest ranking female Krav Maga (Israeli self-defense) black belt instructors in the U.S., who instructs children and adults in self-defense.

Certainly, a bully might decide to pick on the new kid in school who happens to be small in stature or humble in disposition, traits that create the illusion that this individual can easily be preyed upon by bullies.

But this same kid can be prolific in a martial art such as Krav Maga, karate or taekwondo.

The question then becomes: Will the bully likely continue picking on the child who has truly earned a black belt?

And the “picking” here isn’t necessarily physical. Most bullying is non-physical.

Arthur explains that “black belts tend to be kept off of the victim list because they very often possess characteristics that are unappealing to bullies: confidence, self-esteem, verbal and body-language boundary-setting skills, and the know-how to fight back if need be.”

I have witnessed precisely what Arthur has described in the various martial arts schools that I have attended.

I will admit, however, that a few of the schools handed out black belts too prematurely, to kids who exhibited intermediate skills at best.

This is why it’s important that when shopping around for a high quality martial arts school, the parent must be very judicious and discriminant, and not be swayed by slick sales talks or pressure to “sign up now for the great deal” or “get a black belt in 90 days.”

Avoid schools that put the heat on you to sign a long-term contract. And no child or adult can attain a black belt level in only 90 days, no matter what the instructor says. That’s like saying your child can master golf in 90 days.

A child, adolescent or teenager who has truly earned a black belt would be able to make a spectator say, “Dang she’s good!” or “Holy cow!” after seeing a performance of a kata or form.

“Bullies most often look for victims they deem weak, meek and insecure (not adjectives assigned to black belts), so that they have the best chances of successfully putting their targets down in order to pick themselves up,” says Arthur.

Jarrett Arthur is with Jarrett & Jennie Customized Self-Defense, which offers safety and self-defense services for employees and students.