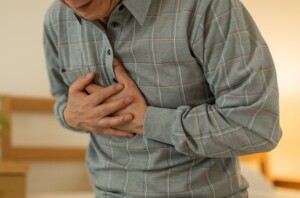 The higher the calcium in your arteries (shown by a calcium score test), the likelier you’ll suffer a heart attack. Maybe it’s time to get your calcium score!

Researchers may be able to predict future severe cardiac events in patients with known, stable coronary artery disease (CAD) using coronary calcium scoring, according to a study published in the online edition of Radiology.

“The amount of calcium in the coronary vessels, as measured by CT, is of high predictive value for subsequent serious or fatal heart attack in these patients,” says Marcus Hacker, MD, “independent of the patient’s age, sex and other coronary risk factors.”

Dr. Hacker is lead study author, and resident physician in the Department of Nuclear Medicine and leader of the research unit for nuclear cardiology at Ludwig Maximilians University in Munich, Germany.

According to the National Heart, Lung and Blood Institute, CAD is the leading cause of death in the U.S. for both men and women, killing more than 500,000 Americans each year.

Currently, calcium scoring – measuring the amount of calcium in the arteries – is used as a screening exam and in cases of suspected CAD, but not in cases of known CAD.

Dr. Hacker and colleagues set out to determine if calcium scoring would lend additional prognostic value to SPECT findings in patients with known, stable CAD.

Over a median period of 5.4 years, the patients were followed up for severe cardiac events.

Twenty-three of the 260 patients had a fatal or severe heart attack, and 40 additional patients underwent bypass surgery.

The results showed that patients with an initial calcium score greater than 400 were at significantly increased risk for severe cardiac events.

“We found that coronary calcium seems to play an important role in predicting subsequent heart attack or sudden cardiac death,” and this adds prognostic value to SPECT findings, says co-author Christopher Uebleis, MD, member of the research unit for nuclear cardiology at LMU.

Dr. Hacker pointed out that combining calcium scoring and SPECT can help identify patients with known CAD who are at highest risk for serious or fatal heart attacks.