Bad Cough in Elderly: When to Go to the ER 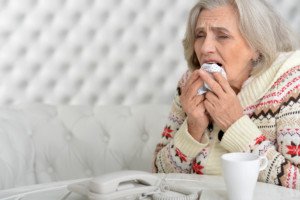 A bad cough in the elderly can mean pneumonia, a top killer of the elderly, so head to the emergency room promptly.

If an elderly family member (over age 65) has a cough that seems to be getting worse, take them to the emergency room, because this can mean pneumonia.

Pneumonia is the fifth leading cause of death in the elderly (over age 65).

“If there is fever, shortness of breath, and/or mental status changes, one should definitely visit the doctor’s office,” says Richard Honaker, MD, Chief Medical Advisor at Your Doctors Online, an online doctor chate site.

“If none of these are present, it is recommended to see a doctor if the cough lasts more than a week, is rapidly worsening, impacts sleep, is severe or is causing distress,” continues Dr. Honaker, who has 30+ years’ experience as a primary care physician.

My mother, whom I consider “young elderly,” developed a nagging cough that involved phlegm (a “productive” cough).

I didn’t think much of it since she felt fine otherwise, and has had coughs in the past.

“Because illnesses in older adults can be more serious and life threatening, I would suggest that they call their doctor who can then evaluate them and determine the appropriate next steps,” says Amber Robins, MD, a board certified family medicine physician practicing in Arlington, VA.

My mother called the Kaiser Permanente hotline to receive some advice from a nurse.

The nurse said that sometimes, it takes about three weeks for a cough (non-pneumonia) in the elderly to work its way out of the system.

A few weeks later I was visiting and noticed my mother was coughing quite a bit—the same type of cough, but very frequently and for lengthy episodes. She was hacking up phlegm.

I wondered if the previous bout had never really gone away, and instead whatever had caused it was still in her system, this time all fired up with a vengeance.

My father informed me that my mother had been coughing like this for the past three or four days.

My father should have been more tuned into this problem and gotten my mother to the emergency room.

“Coughing in older adults can be due to several medical reasons that include both heart and lung disease,” says Dr. Robins.

Pneumonia, however, should always be considered even if the older individual does not have a chronic lung disease or a known heart problem. The earlier that pneumonia is treated, the higher the chance for recovery. 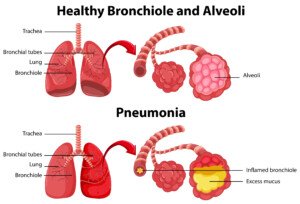 Instead, my father had believed that it was a mere resurgence of the cough of several weeks ago that the nurse hadn’t seemed too concerned about.

In fact, the nurse never even mentioned that it might be pneumonia!

Why didn’t the nurse say, “I can’t diagnose over the phone, but when an elderly person has a persistent or worsening cough, they should go to the ER to rule out pneumonia or a bronchial infection” ?

I couldn’t help but think about pneumonia, as the cough had a sinister sound to it. TRUST YOUR GUT.

I also had no reason to believe my elderly mother was immune to this infectious disease.

I said, “We have to get you to the ER. If this is pneumonia, it can be easily treated in the early stages.

“But if we don’t go to the emergency room, and this is pneumonia, it will progress beyond the point of no return.”

Well, that clinched it, and I took her to the ER, where the chest X ray confirmed “a little pneumonia.”

It was “a little” because I had gotten her to the ER early in the disease. Treatment was an antibiotic.

Dr. Honaker has been recognized by D Magazine as one of the Best Doctors in Dallas several times and a Texas Super Doctor by Texas Weekly. He’s also a recipient of the Physician Recognition Award from the American Medical Association multiple times.

Dr. Robins has been active in various research studies that include gynecologic cancers, adolescent mothers and minorities in medicine.