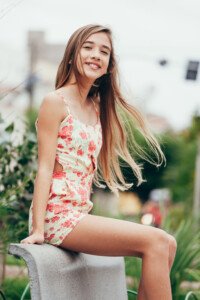 An expert explains the risks children have in developing anorexia nervosa when their mother struggles with the eating disorder herself.

How much can an anorexic environment, created by a mother, raise the risk of her children (particularly daughters) developing an eating disorder?

How much are daughters of mothers struggling with anorexia at risk for internalizing the thought process?

Kids at a very young age may imitate what they see around them without fully understanding what is going on.

But, are they more likely to become anorexic, have a poor body image, and obsess about food?

However, this disorder is virtually unheard of in cultures where the thin body is not prized.

Rosenbaum explains, “We also know that being raised in a household with disordered eating places a child at risk for developing the behavior.

“Children observe their mother’s behaviors and hear her comments about her body. This can greatly influence how the daughter or son perceives his or her own body and can influence the child’s own relationships with food.”

This is why it’s extremely crucial for mothers, whether they struggle with anorexia or not, to be very cognizant of what they say about their bodies within earshot of their kids.

“A child will notice when his or her mother may cook a healthy dinner for the family but not eat with the family or not eat the same food,” says Rosenbaum.

“Children hear when their mothers criticize their own bodies and when they dress to hide their bodies.”

As part of therapy, Rosenbaum involves family members in the treatment process. This includes husbands who can be a main support system in the recovery process.

They need to have a solid understanding of anorexia and other eating disorders, says Rosenbaum.

The husband can also play an important role in encouraging healthy eating and a positive body image among his children, so he should not turn his back on getting educated.

When it comes to how a mother’s disordered eating and negative body image can affect her children, it is clear children are impressionable and parents need to be mindful of this.