Does an EMG Test Hurt? 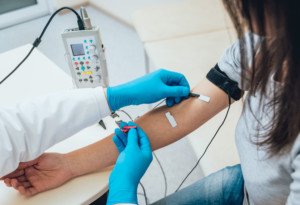 An EMG test can actually hurt.

It depends on how sensitive a person is to pain, and in the case of an EMG test, the pain can come from two sources: an electric shock delivered by the doctor, and needle pricks, which can take the form of an embedded needle that the doctor maneuvers around while it’s beneath the skin.

I sat in on my mother’s EMG test for her suspected pronator teres syndrome.

The doctor had warned her the day before, “It will be unpleasant.” The needles are a little thicker than acupuncture needles, said the doctor.

An electric shock is always an unpleasant experience, and there will be times that the doctor will increase the voltage.

I was watching my mother’s face while he applied the shock with a cell-phone-sized device that he’d press a button on for a split second.

She was lying on her back, eyes closed, while he worked on her arms. Her eyes would mildly flinch, and sometimes flinched more noticeably. Sometimes her face twitched from the discomfort.

However, in my mother’s case, most of the hurt from the EMG came from the needles.

The doctor would place a needle on her skin, then tap the top of it. At one point he embedded a needle about a quarter inch into her skin on the underside of the palm, and moved it around.

The most painful needle prick was when it was applied to my mother’s left palm, even though the doctor had tested her right palm first. She let out a good yalp when this happened.

How much an EMG test will hurt will depend upon where the needles are being applied, and how tolerant an individual is of this kind of pain.

I’d imagine that if they were concentrated on the upper legs, they wouldn’t hurt as bad.

I think what would hurt most during an EMG test is the patient’s anticipation of what the diagnosis might be.

I’d venture to say that the needle pricking of an EMG test doesn’t hurt nearly as much as the “pricking” that occurs during the extractions that come with facials.

Extractions on the nose hurt to high heaven (I’ve had them done). However, these don’t hurt nearly as much as sclerotherapy on the nose, which I have also had.

If you’ve had facial extractions, and especially sclerotherapy (at least on the nose), then the needle pricking of an EMG test certainly won’t hurt too much in comparison.

The bigger issue for some people, as far as pain during an EMG test, will be the electric shocks.

The electric currents last a split second, but EMG literature warns that these are not pretty.

Most people will find that at least some components of an EMG test will hurt, but you must realize that in order to find out what’s wrong with you (or not wrong with you), the EMG test is going to have to hurt.

Despite the pain or discomfort, this neurological testing procedure is perfectly safe, and my mother’s doctor said that a person can have an EMG test “all day long and it won’t harm them.”