Can You Be Too Old to Get IBS (Irritable Bowel Syndrome)? 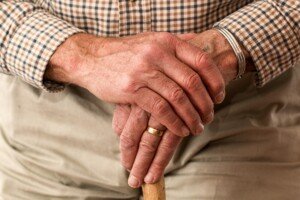 Are you thinking, “I can’t possibly have IBS because I’m too old!”? Then think again. You can be as old as the hills and still develop irritable bowel syndrome.

An individual being too old for IBS?

“No! We need to first better understand IBS in order to see why different people develop this disease at different ages,” says Pejman Katiraei, DO, FAAP, an integrative physician whose many areas of specialty include adult and pediatric IBS.

Let’s examine the gut’s foundation. Some people are genetically predisposed to intestinal problems more than are other people.

This is why two people may eat the same bacteria-contaminated food, but only one gets sick.

“By looking at things in this way and treating the problem underneath everything, we can help increase the resiliency of people and keep them healthy.

“There are ways to overcome genetic weaknesses.  Having a gene does not mean you have to have the disease.”

Regarding IBS, there are individuals who have weaknesses in their intestines, whether it is a lack of digestive enzymes or a hyperactive immune response.

For some people, this may lead to subtle food reactions. This manifests in infants as colic or reflux.

“As these children grow up, they then develop ‘allergies’ with a chronic runny nose –- these children (and adults) are not having a reaction to the environment, but rather, they are reacting to the foods they are eating.”

With these kids are often recurring ear infections, which means recurring antibiotic ingestion. The human gut has “good” and “bad” bacteria.

Antibiotics kill the bad bacteria, but they also destroy the good, beneficial bacteria in the intestines. This weakens the intestines, perpetuating the vicious cycle.

“Next thing you know, the child ‘suddenly’ has IBS.  It wasn’t ‘sudden!’  We just couldn’t recognize all the complaints that started in infancy.

“If that child was taken off dairy and/or gluten earlier in life, chances are they would have never developed IBS.”

In those with a hyperactive immune system, chronic stress results in an immune response that does not know how to shut itself off, as it would in a person who is blessed with a genetic predisposition to a resilient gut.

“As such, the immune system starts irritating the inside of the intestines, and this irritation ultimately shows up as IBS,” says Dr. Katiraei.

IBS does not have one cookie-cutter cause, which is why you cannot be too old to develop this condition.

An example would be a 50-something who’s always been healthy and takes a trip out of the country.

They suffer some temporary digestive upset from some bad food they ate in the other country and then forget about it.

Years later, says Dr. Katiraei, they “‘suddenly’ develop IBS after a seemingly minor flu or other illness. While this person may not have any genetic vulnerabilities, the parasite that they caught while on travel caused subtle but perpetual inflammation or irritation in their intestines.

“Then, any minor insult on top of the irritation causes the intestines to stop functioning well, which then results in an IBS picture.

“I have seen countless cases where once a person gets treated for a parasite, fungus, or odd bacteria, all of the sudden their IBS symptoms get better. IBS can show up at any age. It just depends what is causing the IBS to show up.”

Now that you know you can’t be too old to develop irritable bowel syndrome, realize that the older you get, the more likely that your IBS-like symptoms may actually be colon cancer!

In other words, don’t assume you have IBS and think it can’t be colon cancer because after all these years you’ve always been healthy.

Risk of colon cancer goes up with age, spiking after age 50.

If you have unexplained diarrhea, constipation, bloating, abdominal pain, weight loss or fatigue exceeding a few weeks, see a gastroenterologist to rule out colon cancer.

The diagnosis of IBS is made after a complete series of tests rule out other causes of your GI symptoms.

Dr. Katiraei created Wholistic Kids and Families for people interested in learning how to raise a healthy child (and future adult) in a world that’s becoming increasingly polluted with toxins (chemical and emotional).