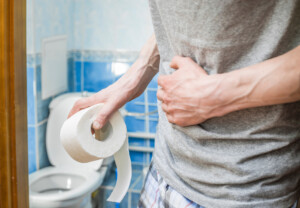 Wouldn’t it be great if your IBS stomach cramping and pain and bloating could be relieved with a simple antibiotic drug?

IBS relief that lasts is here with an FDA approved drug, thanks to Cedars-Sinai Medical Center.

In this study, IBS patients reported continued relief of irritable bowel syndrome symptoms after going off the drug, called rifaximin. This is a minimally absorbed antibiotic; it remains in the gut.

The trade name for the drug is Xifaxan.

“The study out of Cedar-Sinai was one of the studies that led to the approval of Xifaxan for IBS-D (diarrhea predominant IBS),” says Alan Gingold, DO, a board certified gastroenterologist with the Digestive Healthcare Center of NJ.

Dr. Gingold continues, “The study showed that a course of Xifaxan not only helped with the IBS symptoms of diarrhea but also helped with the abdominal pain and bloating that accompanies IBS.

“These symptom improvements seemed to be sustained beyond the time that the patient was on antibiotics and seemed to last for weeks to months beyond the course of antibiotics.

This also brought up the idea that there is an association between IBS and small intestinal bacterial overgrowth (SIBO) — and treatment of the SIBO improves the IBS.”

Consistency of stools also stayed improved in the study subjects.

For some sufferers if IBS, treatment isn’t very effective. Treatment options include fiber supplements and changes in diet.

Xifaxan offers hope for these patients, especially since its benefits keep working weeks after the antibiotic is stopped.

Irritable bowel syndrome is typically diagnosed after all other possible causes of the symptoms have been excluded.

The symptoms of colon cancer are strikingly similar to those of IBS.

This is why you must have a colonoscopy if you’re experiencing any of the following symptoms:

• Blood In The Stools

• Diarrhea that Alternates with Constipation (just what does this actually mean?)