Tall Women Should Stop Wearing Flats Because They Are Unflattering! 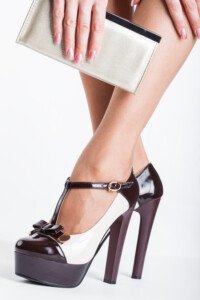 Flats are very unflattering if the only reason you wear them is because you’re “too tall” for heels.

Seems like 90 percent of the women I see wearing flats are over 5-8. What’s up with this? What’s so bad about being as tall as a man? Is it because you don’t want to appear taller than the man you’re with?

The tall women still asks the man to take out the heavy garbage and unscrew the tough jar lids, so why would a tall woman feel unfeminine, too big or not “protected” by her shorter man?

The tall woman is still built like a woman, so I’ve never understood this thing about “looking funny” with a shorter man.

In fact, if anything, when a tall woman wears flats so that her shorter boyfriend or husband doesn’t feel insecure, this can be taken offensively by the man!

It’s as if to say to him, “Hey honey, you look so much like a pipsqueak that I don’t have the heart to wear heels and stand next to you, so I’m going to be condescending and wear my slippers so that you don’t look so short.”

Yes! This is essentially what flats say to a short man when his lady wears them because he’s not so tall!

Suppose you’re naturally six feet and he’s average height, like 5-10. Guess what. Whether or not you wear heels, he still looks 5-10.

So what difference does it make if you’re several inches taller? Your height doesn’t change HIS height.

Also, many very tall women who wear flats are not with men anyways, so not wanting to “intimidate” their boyfriends or husbands, or look “funny” next to a man, would not apply in these cases.

Come on, ladies, it’s time to strut your height! I just got home from a symphony, and I tell you, every woman I saw who appeared to be at least a natural 5-10, had flats!

The place was crowded so I saw a lot of populace, and it is no coincidence that only one flats-wearer was under 5-8.

I see this constantly; some natural 5-11 or six-foot woman, visibly over age 55, wearing flats with a nice dressy outfit.

Every single time. I might mention that I am superb at estimating natural heights, so when I say a woman is 5-11, you can rest assured she’s within one quarter inch of my estimation.

Why is the senior or almost-senior generation of tall women afraid to wear heels?

Is this a residue of way back when, decades ago, where perhaps it was taboo for women to be taller than their husbands, or just tall even without a man at her side?

Ladies, come on, stop being a slave to the times and start wearing heels!

(I see short and medium older ladies wearing heels, so I’m not inclined to believe it’s an orthopedic issue why the tall ones always wear flats.)