Should Tall Women Wear High Heels to Please Their Husband? 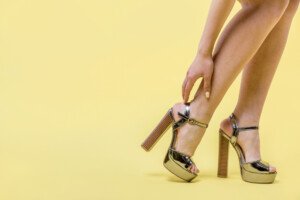 What should reluctant tall women do when their husbands want them to wear high heels, even if it means the woman will be taller than her husband?

Is this akin to a man wanting his full-figured wife to wear skimpy lingerie?

I recently received an e-mail from a 6-1 tall woman who was repeatedly having spats with her husband (also 6-1) over high heels.

He keeps wanting her to wear three-inch high heels, and this tall woman absolutely refuses.

But she’s been compromising with two-inch heels. This doesn’t satisfy her husband. So what’s going on with her husband?

If you ask tall women who hate their height, hate wearing high heels, and always wish they were much shorter so they could feel “normal,” and “blend in,” I bet most would say that this man is being cruel.

They’d insist that such a man is adamant about his wife wearing high heels as a way to exert control.

Or maybe he just has a mean streak and he likes to hurt his wife’s feelings. I bet many tall women in this group would consider this man an insensitive clod, a total jerk.

Now, what kind of response would you get from the other group of tall women: those who love being tall, enjoy wearing high heels, love the attention, walk tall and proud, and wouldn’t trade their height for anything? Their responses would be entirely different, I’m sure.

For instance, this second, confident group of tall women would praise the man for admiring his wife’s height, for loving it so much that he wants to see more of it with high heels, that he gets a kick out of it and is proud to show her off.

Or, according to this second group of tall women, this man is simply being the typical man, not at all insensitive, but simply expressing his desire to see a sexy pair of legs in a sexy pair of high heeled shoes.

High heels do turn on some men, and he’s probably one of them.

A third reason could be that he’s simply trying to build his wife’s self-confidence about her height.

Maybe he figures that once she wears three-inch high heels, there will be a breakthrough and she’ll, from that point on, embrace her height.

The second group of tall women would praise this man because he relishes his wife’s height, rather than the type of man who feels like “less of a man” if he’s with a woman who’s taller. This 6-1 woman should thank her lucky stars.

So what’s the verdict? Should tall women like this 6-1 woman wear high heels only because the husband desires it? Well, she’s already compromised with the two-inchers.

On the other hand, is it really a hardship to add just one more inch? Perhaps she could do this, but then confine wearing the high heels around the house.

If the husband insists they go out in public, then it’s clear he wants to show off his wife. The woman didn’t tell me why her husband wants the three-inchers.

But perhaps the husband’s reasoning is similar to a parent insisting that their child jump off the high dive once and for all.

We all know that once a person jumps off that high dive, a new level of self-assuredness instantly kicks in. Maybe this is what the husband has in mind.

On the other hand, it could be that he simply finds tall women beautiful; the taller, the better!