How Much Can Thyroid Problems Be Blamed for Obesity? 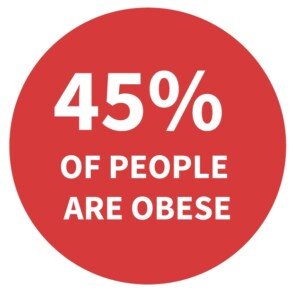 Where do we draw the line for blaming thyroid issues on obesity? Can low thyroid make a woman weigh 528 pounds?

That’s a LOT of weight to attribute to a sick thyroid gland.

It seems that only laypeople, not doctors, insist that obesity can be caused by thyroid problems, even in the case of Victoria Lacatus.

Apparently, the morbidly obese Lacatus had a thyroid disorder that did not respond to medication.

The “comments” to the msnbc.com article about her have filled up rapidly, with many posters insisting that her extreme obesity was caused by a thyroid condition, in particular, hypothyroidism that was unresponsive to Synthroid or other treatments.

Can hypothyroidism actually cause morbid obesity? 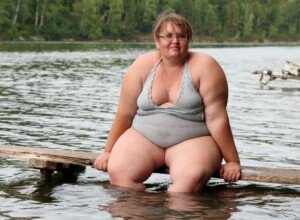 “They are told over and over that their thyroid is fine or given Synthroid or Levoxyl until their levels are normal and told it cannot be their thyroid.”

He continues, “However, when we check their metabolism it can be 500 to 1,000 calories per day deficient or more.

“This adds up to a 10 to 15 pound weight gain per month, and over the years it is hundreds of pounds.”

Dr. Holtorf mentions the case of one particular obese patient who failed to lose weight after a gastric bypass (stomach shrinking surgery).

She was placed in a hospital so that her caloric intake could be monitored: 500 calories per day. She still lost no weight.

“She came to us and we found she was severely low thyroid and very low metabolism, despite standard blood tests being normal,” says Dr. Holtorf.

“She was finally able to lose weight with proper thyroid replacement with T3, not T4 (Synthroid) and treating her leptin resistance. While not everyone will be so dramatically affected, we see such similar cases all the time.”

Dr. Holtorf adds, “With suboptimal thyroid treatment (considered to be fine by the majority of physicians), there will be ongoing difficulty losing weight, or continued weight gain. It can be 10 pounds a month or a hundred.”

In the case of Victoria Lacatus, who died from a heart attack, we don’t know what her exercise habits were. Those who believe that she was too heavy to exercise are mistaken.

Whether or not you have a thyroid condition, whether or not you are extra obese, a little heavy or on the skinny side, you absolutely must exercise on a regular basis: cardio and strength training, and include bouts of intense, rigorous sessions. 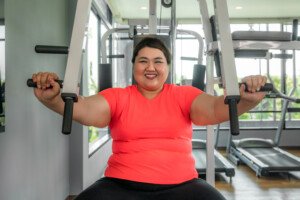 A thyroid disorder is no reason to avoid exercise, even if you’re obese.

And if walking across a room is all that the obese person can do, then that’s the exercise: a 10 second “work interval” across the room.

Rest a minute or two. Repeat. Rest. Repeat 10 times. This can be done several times a day.

Water activity is also a very viable exercise option for the morbidly obese. And I can’t say it enough: lift weights. This can be done while seated.