Dent in Middle of Thigh Muscles Is Benign, Harmless 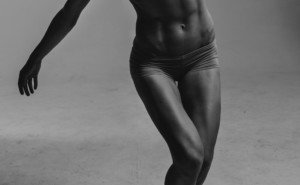 There’s no cause for alarm about that dent in the middle of the front of your thigh; there’s a benign explanation.

As a result of consulting with Dr. Google, many people are in a state of panic upon discovering a “dent” in the middle of their upper thigh.

Check out the woman below; does she have the same kind of dent in the middle of her upper thighs as in yours?

This athlete’s thigh has an elongated dent. 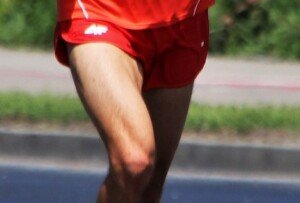 The lower central dent is caused by the tendon that’s between the two pennate structures of the rectus femoris muscle.

The rectus femoris is a pennate type of muscle. This means that the muscle fibers attach diagonally to the central tendon that divides the two sections of this muscle.

So more specifically, the rectus femoris is a bipennate structure (“bi” meaning two). You can clearly see this in the anatomical illustration below.

The more muscle fiber in any given cross-section, the more force that can be generated.

The central tendon will be more visible in a person who has lower bodyfat, in combination with toned muscles.

If you see a dent that wasn’t in your middle front thigh before, you’ve either lost some bodyfat and/or increased the tone of your muscles.

Dents in the thighs actually go by several names in the bodybuilding/physique-sculpting community: cut, crack and definition. The goal of such athletes is to get as deep a cut as possible.

There’s a reason why you’ve never seen flabby, mushy thighs with dents in them.

Soft, untoned muscles aren’t firm enough to create this impression, especially if there’s a higher level of bodyfat. Thus, a “skinny fat” person can be minus a visible dent in their thigh.

People who’d be considered “fat” won’t have a visible dent in their thigh, middle or anywhere.

Do not freak out or feel fear upon looking at your thigh dent.

Instead, reassure yourself with anatomy illustrations and images of physique athletes.