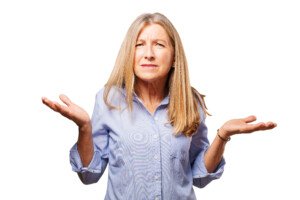 Find out what it may REALLY mean when an ultrasound technician tells you that part of an ovarian “cyst” looks “complex.”

If you’ve been keeping yourself medically informed about the human body, then you know that when an ovarian cysts has “complex” qualities in a postmenopausal woman, this gets the attention of the radiologist fast.

So imagine my anxiety when I asked the ultrasound tech, when she completed the external exam, if the “cyst” she said was possibly on an ovary, had any complex portions – and she said yes.

If this happens to you, I strongly recommend that you ask the tech to repeat the ultrasound—after you let your bladder get more full, even if you feel you really need to relieve yourself.

She wanted to do a transvaginal ultrasound, but I declined because I knew this would be intolerable.

So I’m lying there, weighing my options. I then asked if it’s possible that the transvaginal would show that the alleged ovarian cyst was not “complex,” and she said it was possible, and that the external image has limitations.

Only after a few minutes of this back and forth did she finally suggest a repeat ultrasound, because it appeared as though my bladder wasn’t maximally full.

Nevertheless, she changed her tune and said to drink more water and wait in the lobby, and when I felt extremely urgent, to have the clerk notify her.

She repeated the ultrasound, and it was uncomfortable due to my urgency (whereas the first one wasn’t).

She said the image was much better. As for the “cyst” on the ovary, she now said that based on her better view of it, she no longer felt I needed a transvaginal, and that the radiologist would probably just recommend a “follow-up in two or three months.”

The so-called cyst was average 1.5 cm, and the tech said this qualified it as a “follicle,” and that only when they’re at least 2 cm are they called a cyst.

With a much clearer image, she was able to see that it was “homogenous,” meaning same throughout, rather than more than one pattern or variegated. This was good news.

Another feature she was able to discern was that the “follicle” lacked “septations.”

Another good sign was that when she did a “flow” to see if there was a vascular network within the follicle, nothing “lit up.” This meant that the follicle did not have its own blood supply.  Complex ovarian cyst

These are all features of a benign finding.

She had let me see the image and showed me the negative result when she did another “flow” test.  Complex ovarian cyst

I might add that she told me she was NOT supposed to reveal such information to me (she told me this at least twice), but I guess there was something about my demeanor that encouraged her to break the rules.

But thank God I saw the image; it was very homogenous. However, it wasn’t black (which would indicate a very shallow object). It was a smooth gray. What WAS it? I’m postmenopausal, so it couldn’t have been a functional cyst.

Several days later I received a voicemail message from the doctor’s nurse with these exact words: “YOUR PELVIC ULTRASOUND WAS NORMAL.”

Hmmm. I sent an e-mail to the doctor asking to send me the report. No way would I mention what the ultrasound tech had told me, as this would get her in trouble.

I asked the doctor what this meant. Her response:

Your abdomen has fluid inside at all times bathing all your organs, and sometimes if they see some at the time of an ultrasound they will mention it because it may be associated with menstrual bleeding or an ovarian cyst etc. However, there was no comment of pathology and your right ovary as well as left was normal without cysts on the imaging.

So if the ultrasound tech tells you an ovarian cyst looks complex, ask yourself if your bladder could be MORE full, then ask for a repeat ultrasound in 30 or more minutes.