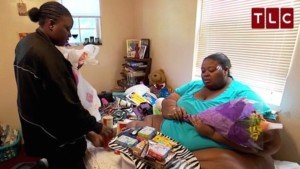 Ever wonder what on earth is going on in the heads of the “caretakers” to the super morbidly obese?

These 600 to 1,000 pound men and women are confined to their bed, so it’s impossible for them to get food.

What makes a person keep bringing tons of junk food to a super morbidly obese family member who’s so huge they can’t even get out of bed?

Or if they CAN get out of bed, they’re certainly too fat to get food, let alone prepare and cook it.

So instead they somehow persuade their enabler to continue bringing them thousands of calories worth of unhealthy food by the hour.

What kind of manipulation skills can these super morbidly obese, bedridden men and women, possibly have?

What kind of power do they possess over their enablers? 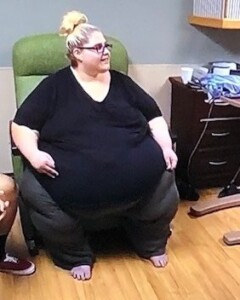 Or perhaps it’s more of a situation that their enablers (spouse, significant other, parent, grown child, sibling, even non-relative friend) are just very mentally frail.

“As is the case with drug addiction, changes in the chemistry of the brain can cause people struggling with food addiction to manipulate others,” explains David Sack, MD, a psychiatrist specializing in addiction disorders, and CEO of Promises Treatment Centers in Malibu and Los Angeles.

Their drug of choice is food. And tons of it.

What’s mind-blowing is how a physically incapacitated person with little money can exert control over an able-bodied person who has a car.

“If the enabler tries to stop enabling, the food addict may use a number of strategies to elicit compliance,” says Dr. Sack.

“They may use threats, guilt and heartbreaking pleas that are extremely persuasive,” says Dr. Sack, “especially when used against someone who is codependent.”

The TLC program, “My 600 Pound Life,” never shows the super morbidly obese person exhibiting behavior that puts a stranglehold on the enabler. At least not in my opinion.

For instance, maybe some viewers found “Penny” or “James” to be intimidating. But I sure didn’t.

At the most, the 600+ pounder is shown pouting or whining, occasionally raising their voice – but nothing that would – or should – paralyze the enabler with the fear of “I better bring her three Big Macs or else I’m doomed.”

In other words, the hissy fits when food is occasionally delayed or denied amount to little more force than what a toddler can exert.

Yet the enablers eventually give in. Of course, the dynamic usually (not always) changes once the 600 pounder commits to losing weight to qualify for weight loss surgery.

• I’m sure that the more dramatic fits are edited out.

• Nevertheless, why can’t the enablers just ignore them?

• How about leaving the home when they occur?

• Or popping in ear plugs?

The enabler is not the one in control.

The enabler, on a superficial level, seems like the one in control. You’d think that anyone who wipes your fanny would have complete control over you. But it’s the bedridden individual who wears the crown.

Can the Enabler Sometimes Be the One in Control?

However, sometimes it is the enabler who IS in control, and thrives on this control – even if it comes with the daily wiping of grime out from in between huge folds of sweaty fat.

“Those who are morbidly obese are also vulnerable to being manipulated by the people around them,” says Dr. Sack, “who may have their own unconscious emotional needs,” such as relishing being so needed.

Dr. Sack is a sought-after media expert and has appeared on “Dateline NBC,” “Good Morning America,” “The Early Show,” and “The Doctors,” among many other outlets.