Are You Rude Due to Your Hearing Loss?

If you have hearing loss, here’s why people get irritated when you ask them to repeat or why they say “Never mind, it’s not important.”

Many people with hearing loss, impairment, who are hard of hearing, etc, report that many individuals get irritated or become rude when asked to repeat something or speak louder.

I’ve seen this situation come up in advice columns: A hearing impaired individual writes in to complain that, so often, people become irate and impatient when that individual asks them to talk slower, louder or to repeat what they just said.

One such woman with hearing loss said it was hurtful when people would respond, “Never mind, it’s not important,” when she asked them to repeat their statement or question.

To all such men and women with hearing loss who have experienced rudeness or exasperation from people, I have a question for you:

HOW do you ask people to speak louder, slower or repeat things? Take a good look in the mirror and honestly answer this very fair question.

I know people with hearing loss. I can’t begin to tell you how many times I’ve witnessed one of them, a woman I’ll call “Linda,” respond rudely to a speaker when she couldn’t understand them!

She’ll typically deliver a curt “What?!” with an anguished face when she can’t understand what was just spoken to her.

This makes the speaker think that Linda blames THEM for why she didn’t hear them clearly!

Think about it: You’re talking to someone (and, in this hypothetical scenario, you can hear perfectly). That person reacts with an exasperated “What?!” and looks miffed.

How would this make you feel? Would you want to kindly, patiently repeat yourself? Or would you be totally put off and decide to end the interaction with a “Never mind, it’s not important”?

People do not want to feel as though the hard of hearing listener blames them for why they can’t understand their speech. 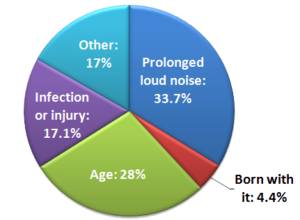 Speakers who are made to feel that the listener blames them for “mumbling” or talking unclearly will find this very offensive and rude.

Granted, some people DO mumble and talk unclearly, but let’s face it: Most people do not have this problem.

I know I don’t. In fact, I’ve been told I sometimes talk too loud. As a person who communicates (writing) for a living, I place a high premium on the importance of clear speech. I don’t drink or take drugs; my speech is very clear.

One time I had a phone job. I called someone and began speaking. The cranky man interrupted with a blunt, angry “Speak up! I can’t hear you!”

Well, I didn’t speak up; I HUNG up. I’m sure he thought I was rude! Had he interrupted with a kindly “Excuse me, but can you repeat that and talk a bit slower and more careful? I’m having trouble hearing you,” I would have kindly obliged.

I know a relative with hearing loss who wears hearing aids, but he often gets irate with me if he doesn’t understand me. He accuses me of “running my words together.”

If you have difficulty with hearing, have you ever accused the speaker of “mumbling” or talking too fast?

This is VERY insulting and provides NO incentive for the speaker to be kind and patient with you.

If you think only children mumble, realize that kids’ voices have higher frequencies, and that’s why you have more difficulty deciphering kids’ speech.

Linda thinks nowadays, everyone on the phone who leaves messages “can’t talk clearly.”

The man with hearing aids I mentioned believes that “today’s movies have poor sound quality,” that the actors don’t speak loud enough and mumble.

You’re pretty much guaranteed a kind, thoughtful, patient response from the speaker to repeat or talk slower if you do your part:

Be gracious when asking someone to repeat their question or statement, without implying that they can’t talk clearly.

Don’t be curt just because the speaker is a teenager or child, either. And remember, children emit higher frequencies.

I’ve witnessed Linda outright tell people on the phone that they need to speak more clearly; her tone of voice and choice of words clearly tell the talker that she blames THEM.

Often, when a person finally suggests that the listener might have hearing loss or that they should get their ears checked, they typically insist, “Nothing’s wrong with my hearing.”

If you think these suggestions are rude, why is there a double standard when it comes to visual impairment?

If someone’s squinting to read a sign, and their buddy says, “Hey man, when’s the last time you had an eye exam?” few people would consider this rude.

If you saw someone struggling to read fine print, you’d be apt to say, “Maybe you should see an optometrist,” without ever considering this might be rude.

You’d especially suggest an eye exam if you witnessed a friend or family member often bumping into edges of furniture.

If you’re hard of hearing and are fed up with being treated with impatience, being dismissed or being reacted to in a rude way when you ask the talker to adjust their speech, I urge you to re-evaluate how you respond to people when you don’t understand what they’re saying.