Can Hearing Loss Be Prevented In Old Age? 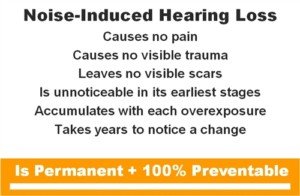 A lot of hearing loss that occurs in old age can be prevented; being “hard of hearing” does not have to be a part of aging if you know how to protect your ears.

Noise-induced hearing loss is a leading cause of hearing impairment.

According to the National Institute on Deafness and Other Communication Disorders, 22 million U.S. people age 20 to 69 have permanent, noise-induced hearing loss  —  which comes from being around loud sounds.

When I was an adolescent, I sometimes warned my father about how one day he’d have hearing loss, especially in old age (because the longer you live, the more loud noise you’re exposed to if you don’t use ear protection), because he’d frequently spend time in his basement workshop using loud power tools.

At best, he’d have cotton in his ears. But mere cotton does not protect against hearing loss. Every weekend he’d mow the front and back yards, which took two hours.

Every Sunday he directed a church choir; I remember he’d be gone for three Masses in a row, and sometimes directed on Saturdays.

And then there were the nightly rehearsals for Christmas and spring concerts; the singing and organ, reverberating through the rafters, were quite loud.

One day I noticed that my father was developing a habit of setting the TV volume on the loud side.

I’d tell him that listening to a loud TV will, over time, cause hearing loss. I knew all this intuitively; common sense.

He never took me seriously. With each passing year, the TV got louder. And louder. Eventually it was blaring and I couldn’t be in the same room.

Maybe he chose the loud volume for the same reason that young adults like to blast car high-tech sound systems at top volume.

And maybe some of his choice was based on a progressing hearing loss. But even if hearing loss is present, it will be accelerated with a blaring TV.

Today, my father is a senior citizen and has significant hearing loss.

I don’t believe for one second that this hearing loss would have happened in the absence of his decades of exposure to loud noise. I don’t blame it on old age.

Had my father worn ear protection while in his workshop and while mowing the lawn, and used some sense when it came to adjusting the TV volume, his hearing wouldn’t be nearly as bad.

“We cannot stop the inevitable decline in hearing that occurs with aging (gradual decline in the high frequencies, typically after 60 + years of age),” says Rachel Raphael, M.A., CCC-A, an audiologist with Mercy Medical Center in Baltimore.

As for the endless choir rehearsals and Masses, well, I’m convinced he could have pulled off the feat just the same had he been wearing earplugs.

But he didn’t have the foresight to realize that loud noise today means hearing loss tomorrow – not just in old age, but in middle age.

Though some people suffer hearing loss as a result of childhood infections, trauma and congenital defects, remember, 22 million Americans between 20 and 69 have noise-induced hearing loss, or shall I say, self-inflicted hearing loss.

And it’s my business when I am subjected to secondhand loud noise. If a person wants to be dumb enough to permanently ruin his or her hearing with blaring TVs and pounding music, that’s his problem, but he has no right imposing that on other people, any more than a smoker has the right to blow smoke in your face.

As a layperson with common sense, I insist that a lot of hearing loss in old people could have been prevented.

My father’s hearing loss could have been prevented; you need only an ounce of common sense to realize this if you imagine all the thousands of hours of exposure to loud noise he could have prevented by simply wearing earplugs to church, and industrial ear protection while mowing the lawn and working with power tools.

Funny, he tells me, “Just wait and see when you get old, your hearing won’t be so good.” No, I don’t think so; I wear ear protection (custom made earplugs and industrial ear muffs).

I even wear earplugs to noisy restaurants (loud people yapping combined with continuous clashing of dishes as buspeople clear tables and carelessly toss dishes into tubs, and all the clashing heard in the kitchen if our table is near it).

Any place that’s loud, I pop in the earplugs: movies, business seminars where people speak through microphones, the gym (blasting music, banging metal weight plates), and when an ambulance goes by, I stick my fingers in my ears.

If I’m walking by a construction site, I stick my fingers in my ears. You shouldn’t care what people think if they see you plugging your ears; they won’t be buying your hearing aids if you one day need them.