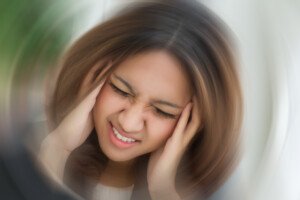 There are MANY causes of sudden, brief episodes of severe dizziness in people who do not have any conditions that can cause this—that is, conditions that are strongly associated with elderly age.

“Most common ones include abnormal heart rhythms, neck, muscle spasms, ear infections, drops in blood sugar and mini-strokes,” says Jacob Teitelbaum, MD, medical director of the Fibromyalgia and Fatigue Centers nationally, and author of “The Fatigue and Fibromyalgia Solution.”

A mini-stroke is also known as a transient ischemic attack. Though elderly age is a big risk factor, middle-aged people and even younger adults can experience a TIA, though in younger adults, this is rare.

A TIA can cause many symptoms, and though a sudden and brief episode of severe dizziness is one of them, it’s not one of the more common symptoms of a mini-stroke.

In fact, if you’re middle aged and especially younger, and you’ve been experiencing sudden-onset dizziness with no other symptoms, this is unlikely to be a TIA, but a checkup with a neurologist would be a smart idea.

Middle Ear Problem As Cause of Sudden-Onset Severe Dizziness

Dr. Teitelbaum says, “A key discriminating factor? Do they have vertigo where it feels like they or the room are actually spinning around in a circle?

“If yes, this points to a middle ear problem. Also, do they pass out without warning? This suggests an abnormal heart rhythm.”

Side effects from medications (especially narcotics), and pregnancy, can cause a bout of sudden intense dizziness.

There are different kinds of “dizziness.” One such type is called orthostatic hypotension. Do you get your symptom only right after you suddenly stand after having been seated for a while?

If so, rise slowly from your seat and when you’re halfway up, pause for 15 seconds, then resume rising to an erect position slowly; this will prevent a sudden drop in blood pressure, which can cause acute dizziness and even blacking out in some individuals.