Symptoms You Can Expect After Coronary Bypass Surgery 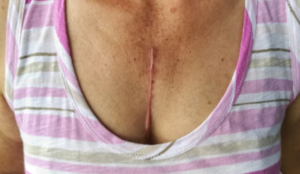 How can the coronary bypass patient know which are normal postoperative symptoms and which ones warrant a trip to the emergency room?

Is the line fuzzy here?

My mother had quintuple bypass surgery, and there were ongoing issues the first three weeks after surgery, including severe abdominal pain.

When I phoned the on-call doctor, he said to get her into the emergency room. So I drove the 40 minutes down there, at around midnight.

After she got out of the car, she began collapsing. At the time, I thought it was a heart attack and had no idea what it really was (it turned out to be a sudden severe drop in blood pressure).

In the ER she was immediately tended to, and this included an ultrasound of her abdominal aorta (presumably to see if the severe abdominal pain was being caused by a rupturing aortic aneurysm).

The cause of the pain was never determined and my mother eventually made a full recovery.