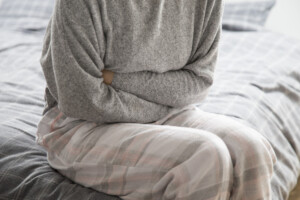 “Change in bowel habits” is commonly listed as a symptom of colon cancer, but this doesn’t mean that microscopic colitis can’t also cause a change in poop habits and appearance.

Your stools and bowel habits can indeed change from microscopic colitis.

So if you’ve been noticing a change in bowel habits lately, sudden diarrhea or a change in the so-called stool caliber — don’t automatically fear this might be colon cancer.

It may very well be microscopic colitis.

“Typically patients experience watery, chronic diarrhea that can last for months or years.” Alan Gingold, DO, a board certified gastroenterologist with the Digestive Healthcare Center of NJ.

“It does tend to be intermittent, and the diarrhea can come and go.

“Why patients get diarrhea in this condition is not fully known, but likely the chronic lymphocytes or collagen deposition causes inflammation and scarring, which prevents adequate absorption of water from the colon — leading to diarrhea.”

I developed symptoms of microscopic colitis some years ago.

It first began with sudden-onset diarrhea. I didn’t think anything of it and didn’t even really look at it, because this began happening in the days leading up to my period, and I’ve had premenstrual diarrhea in the past.

However, I noticed that every time I had a bowel movement, it was in the form of diarrhea, and several times a day.

After my period started, I knew something else was going on, and being the health-conscious person I am, I became alarmed.

The diarrhea was liquidy and presented with a light brown color, sometimes with a greenish tinge.

Normally, my diarrhea is a milk chocolate color and colors the toilet water brown; it’s messy.

But this particular diarrhea was swift and “clean,” creating a pile of very loose, scruffy, flaky stools at the bottom of the bowl, sometimes a few pieces floating in the toilet water.

This diarrhea did not look like diarrhea I’ve had in the past.

It would be another 24 days before I was diagnosed with microscopic colitis. In the meantime, the diarrhea seemed to mostly be a reaction to eating.

Soon after eating, I’d feel a churning in my gut: the formation of yet more diarrhea. 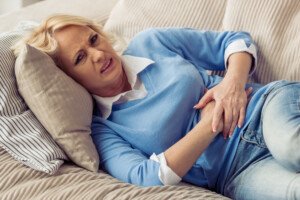 At one point, within 20 minutes after eating a generous amount of brownie and milk, I let loose a lot of diarrhea, and it seemed as though the entire snack went right out the other end.

Spinach (a lot, actually); grapes; sunflower seeds; and different-colored particles such as bits of broccoli and tomatoes.

The diarrhea was more prevalent on days that I consumed a lot of juice and fruit.

I backed off on these, but the diarrhea persisted, though not as much.

Taking an anti-diarrheal drug resulted in two days of nothing, and then I had formed stools, but they looked funny: light brown, scruffy and containing undigested food.

After this bowel movement, the diarrhea returned, and I’d also have very loose stools. The color was always light brown/tan.

Most of the stool pieces sunk in the toilet water, but sometimes there were floating pieces.

At one point a whole mess came out and every chunk stayed on top of the toilet water.

The diarrhea pieces ranged from liquidy to small pieces to bigger chunks, that — when I poked with a Q-tip swab, dispersed rather than maintained their form.

After cutting out fruit, juice and vegetables entirely, I began having loose stools.

But they continued to contain a lot of undigested food: rice, lentils and bits of tomato.

The stools were formed enough to maintain their form when I lifted them out of the water with a plastic spoon.

The layered stools were greasy looking and appeared to be composed of several different substances, rather than all one uniform substance.

They ranged from normal size to small pieces, and the normal sized stools were pointy on both ends.

Early on in the microscopic colitis, I’d feel the stools or diarrhea forming in my gut throughout the night, and there were times it felt I had to go right then and there, but I stayed in bed.

Soon after getting up for the day, I’d have to relieve myself. But as days went on, it would be around noon before I had a movement.

The movements dropped to 1-2 stool releases per day, still odd looking. With more time, there appeared to be less undigested food in the stools.

Over the next several weeks the situation spontaneously resolved.

Microscopic colitis can only be diagnosed with a colonoscopy.

The doctor must collect tissue from inside the large colon for analysis.

Microscopic colitis in my case resulted in a change in bowel habits, mild abdominal cramping and thirst in the middle of the night.

If you suspect microscopic colitis, then remember that only a colonoscopy can detect this.