Can Impending Heart Attack Be Misdiagnosed As GERD (Heartburn)? 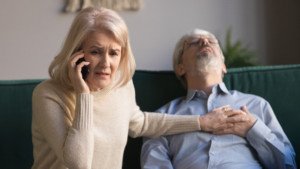 Have you been sent home from the ER with a GERD (gastroesophageal reflux disease) diagnosis as a result of chest pain or difficulty breathing, even though this could actually mean an impending heart attack?

“It’s the one thing people should relay to the triage nurse in the ER department to get moved to the front of the waiting room in a busy ER.”

Don’t pass this off as, “Oh, it’s only indigestion.” This can be a fatal mistake. My mother complained of difficulty breathing one morning, and shortly after vomited.

My father asked her what she ate the day before. I bypassed that thinking and wondered about the vomiting.

Vomiting and shortness of breath are classic symptoms of an imminent heart attack. They can also be caused by GERD: gastroesophageal reflux disease.

Dr. Liu explains, “I definitely think heartburn can mimic cardiac disease as well as the reverse.

“The message would be not to ignore symptoms of chest pressure, burning, indigestion, because either GERD or heart disease is a serious matter.

“Heart disease can take one’s life immediately, while GERD can take one’s quality of life away, not to mention increase the risk of esophageal cancer.”

I took my mother to the ER where she had a chest X-ray (normal), EKG (atypical) and blood test (normal) — none of which can detect severely blocked coronary arteries.

The ER physician asked about her symptoms (chest pain and chest pressure that she’d been having on and off for several weeks, and difficulty breathing), and concluded that she most likely had GERD and discharged her.

Two days later, following a second trip to the ER, an abnormal blood test, and hospital admission, my mother was on the operating table for quintuple bypass surgery and mitral valve replacement.

What went wrong in the ER that first visit?

Dr. Liu explains, “GERD is usually the diagnosis only after excluding cardiac ischemia or aortic dissection.”

In the ER, people with chest pain are given a blood test at least twice to measure an enzyme called troponin, which damaged cardiac tissue leaks into the bloodstream.

If the level is within a normal range, it’s determined that you did not have a heart attack.

However, this test cannot determine that you’re about to have a heart attack — only if you already had one or are in the process of having one.

(A few hours before my mother’s surgery, the surgeon informed me that a massive heart attack was imminent).

For the first ER visit, significant coronary blockage was not ruled out. Only after she was admitted to the hospital after the second ER visit, was this diagnosed via catheter angiogram.

My mother wasn’t even given a CT angiogram in that first visit, despite her elderly status and report of chest pains over the past several weeks.

The CT angiogram has been shown to be a highly effective tool at detecting patients at high risk for imminent heart attacks (Hollander et al, University of Pennsylvania School of Medicine).

“The ER department will usually order a 12-lead EKG which will show if there are any ischemic changes occurring at the time of the chest pain symptoms.

“If the patient doesn’t have pain when the EKG is performed, then the EKG might be normal.

“So the EKG should be done while the patient still has symptoms of chest pain or pressure.”

My mother’s EKG showed a “left bundle block,” which the doctor said interfered with an accurate interpretation.

“Anyone with a history of hypertension, hypercholesterolemia needs to have cardiac ischemia ruled out first, as this is the most common and dangerous thing,” says Dr. Liu.

My mother always had normal blood pressure, but her records did show very high triglycerides.

She was given a GERD information sheet and a prescription to a GERD drug.

The information sheet, however, urged patients to go to the ER if they had ongoing chest pain and other heart attack symptoms.

“Usually the ER doc will give a cocktail of lidocaine, Mylanta by mouth, and if this resolves the heartburn issues, it is probably GERD,” says Dr. Liu.

My mother was in the ER that first visit for many hours and was never given any GERD medications.

If the troponin test, chest X-ray, EKG, blood pressure and heartbeat are normal and you’ve been diagnosed with GERD based on a questionnaire … insist upon further tests to absolutely rule out significantly blocked arteries, even if it means having to be admitted.

Being awakened at 5 a.m. with chest pain that lasts two hours, which happened to my mother, is likely not a symptom of GERD.

Dr. Liu has conducted extensive research and is widely published in the fields of bariatric and gastrointestinal surgery.