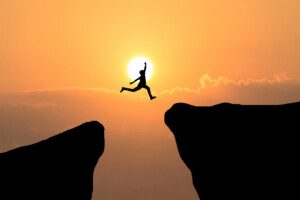 Simon was diagnosed autistic in his late 30s and says this was the best thing that ever happened to him.

The diagnosis meant he no longer had to change.

I was diagnosed with autism in my late 30s, and it was the best thing that ever happened to me.

Before that, I had suffered the worst thing that could ever happen to a parent — the sudden death of my 3-year-old daughter.

I was utterly lost and felt like I was on the scrap heap. For years, I had been trying to prove to myself and others that I was not a failure, and that I was not a terrible father because I felt that I had failed to protect my daughter.

I became so focused on proving my self-worth that I kept moving from one role to another, promotion after promotion.

I felt that whoever I worked for at the time would think I was worthless, and the constant reminders that ‘life goes on’ made me feel like my past achievements meant nothing to anyone other than myself.

I felt no one wanted to take a chance on me, and I was being viewed as ‘damaged goods.’

This feeling of worthlessness was further compounded by the fact that I have been made to feel worthless on several occasions.

Ten years after my daughter’s death, I was finally diagnosed as autistic.

This was thanks to a very observant GP who noticed my traits, how my brain was perceiving things, my relentless focus, and why cognitive behavior therapy had not worked for me.

Receiving a formal diagnosis was a massive relief for me, as it allowed me to understand why my life had been so difficult.

When I heard the diagnosis, I couldn’t help but cry — but this time, it was a relief, as I finally realized that I am not a problem but rather unique.

Autism Diagnosis Was a Turning Point

My diagnosis was a turning point in my life. It allowed me to understand myself better and the environment I needed to be in to be successful.

I realized I was valuable, but only in a supportive and welcoming environment.

I had been in toxic environments before, and it had been difficult for me to function in them.

But now I have the knowledge to ask myself, “Do I need to change?” and I know the answer is no.

With this newfound understanding, I could get off the scrap heap and start rebuilding a future with my family.

I have had great success in my MBA, achieving a distinction, encouraging me to start a PhD.

I have also created a business based on my neurodiversity synergy framework, which has been met with much positive attention.

This is opening many doors for me. As an autistic person, I am aware of the potential that all autistic people must contribute if they are allowed to shine within an inclusive environment.

I am proud to be part of the rebuild and to be able to demonstrate that autistic people are worthwhile.

Simon Preston is a math tutor for Sherpa Online, a lesson space that combines video calling software with their own interactive online whiteboard, offering tutoring in a variety of subjects.