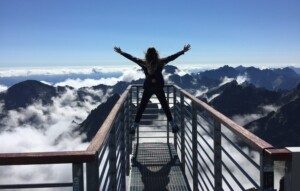 The problem with the functioning label of “high” in autism is that it implies high functioning relative only to a disabled population.

Not all autistic people consider themselves disabled. Plenty of autistic people lead fully independent lives — but the fact is that many other autistic adults need ongoing and substantial support.

Many people who were diagnosed with autism in later adult life had no idea they were autistic for many of their adult years. I was one of those people.

If I’d been diagnosed with autism 20 years ago it might’ve been more generously referred to as “high functioning.”

The term high functioning has become increasingly outdated over the years — namely because it tends to imply that autistic adults who are “high functioning” don’t need any support services.

Remember, autism is a spectrum.

My take on “high functioning” is that it implies relative independence among a population that’s inherently disabled.

If I were to disclose to people that I’m autistic, they’ll automatically think of it in terms of high functioning or “mild.”

But I see no reason to randomly tell people whom I encounter in the course of daily living that I was diagnosed with Autism Spectrum Disorder.

Neurotypicals, far more than Autistics, use the terms high functioning and low functioning.

My understanding of “high functioning autism” – years before I began realizing that I had many autistic traits – was a person who, despite being autistic, was fully conversational and able to hold down a job.

I will never tell people that my ASD is high functioning because, as mentioned, this term implies that I do pretty well – when compared to people who are disabled by their autism.

However, I do pretty well – compared to the vast, vast, vast majority of neurotypicals!

So if I’m “high functioning,” it’s relative to the entire population of humans!

Autistic but High Functioning Among Neurotypicals

The irony is that, long before I began suspecting I was autistic, I’ve always felt intellectually and cognitively superior to the VAST majority of the population. No, this isn’t narcissism or self-absorption.

For instance, I’ve always wondered why people ahead of me in the grocery store checkout take so damn long to count out change. I wonder if they’d talk down to me if they knew I was autistic.

I couldn’t understand why the woman ahead of me in the bank asked the teller to recount the money, when, as the teller quickly counted it out the first time, I just happened to be watching and very easily keeping up with her, while the dolt customer had to have it recounted. This had me peeved all day long.

I don’t need to drive my car 1 mph to spot a parking space like many people do.

And why do so many people call 9-1-1 if they see strange lights in the sky? What — the cops will get out their giant tractor beam and haul in the UFO?

For years I’ve been documenting examples of how daft people could be. The document is very long.

It includes examples of isolated incidents which probably aren’t prevalent in the population, as well as examples that are highly prevalent all over.

I am going to stop here, though there are MANY more examples (unrelated to driving) in the 39,000-word document.

Diagnosed Autistics make up about 2 percent of the American population. It’s logical to deduce that the vast majority of foolish people are neurotypicals.

Yet these are the same people who think that “high functioning” autistic individuals are somehow beneath them or cognitively inferior to them.

At 17 I attended college out of state and had no problems adjusting while NTs around me struggled.

I didn’t drink. Many NTs got “plastered” on weekends. Many struggled with homesickness and other issues. Many college students drop out for these very reasons.

Though I had issues related to my ASD, I graduated at 21, and at 22 moved out of my parents’ house to live in another state — by myself.

And in fact, I gather that there are many autistic men and women who, when compared to the bulk of neurotypicals, are quite high functioning.