Health of Obese Women Who Lift Heavy vs. Those Who Don’t 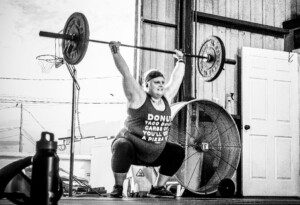 Instagram shows many morbidly obese women lifting heavy weights, promoting them as healthy. How much healthier and fitter are fat women who lift heavy?

Though 240 sounds pretty hefty at 5’8, there are women on Instagram who appear near 300 pounds, deadlifting and squatting enormous loads of weight.

Morbidly obese influencers will point these particular women out as proof that good health can come at any size.

What would be more accurate is the following statement: Impressive strength can come at any size.

But then, this begs the question: Does health improve as strength increases?

I’m pretty sure that the powerlifter is healthier than a same-height, same-weight woman we might see shopping at Walmart who does no strength training whatsoever.

It’s possible that the powerlifter has a healthier diet, simply because she’s a competitive athlete.

The more muscle we have, the more insulin receptor sites we have. This is one way to lower the risk of developing type 2 diabetes.

The powerlifter is far less likely to throw out her back shoveling snow or reaching down to pick up a potted plant than is the Walmart counterpart.

She would also fare significantly better walking all day at Disneyland, being that her legs get a lot of heavy workouts from deadlifting, squatting and supplemental training.

Obese women who lift heavy have a different look to their body than do those we see in the general population such as at Walmart, the local mall, at the park with their preschoolers, at school or town meetings, etc.

The ones who lift heavy are less mushy and doughy in appearance – as a general rule.

But on Instagram, some are SO overweight that they literally have rolls hanging on them – yet are deadlifting and squatting impressive amounts of weight.

“If an obese woman is lifting heavy weights, I would expect this to improve her strength,” begins Dr. David Beatty, MD, a retired general practitioner with 30+ years of experience and an instructor of general medicine for 20 years.

“Muscle mass would increase, and I would hope that body fat would reduce.

“As a knock-on effect she should be more healthy and be at least a bit fitter.

“It will obviously depend on how long each routine lasts and how much effort the person is putting in.

“Doing either heavy or light weight workouts is better than doing nothing at all.”

This is a very fair point, because we have to truly wonder just how much structured exercise – either weight bearing or aerobic – the average morbidly obese individual gets.

No, walking your pint-size dog every day doesn’t count. Neither does housework.

This is about methodical, dedicated workouts for either strength or cardiovascular fitness, such as using dumbbells, barbells, kettlebells, tension bands, a pedaling machine, a treadmill or outdoor paths.

“From the health point of view I would advocate a regime to improve overall fitness rather than a pure heavy weight workout,” says Dr. Beatty.

“I think doing a more prolonged, faster regime using light weights is better for fitness and health rather than a shorter, more explosive set.

“This will be better cardiovascularly and less likely to cause injury.” 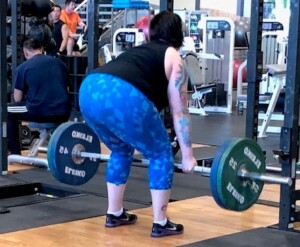 If you’re obese but not aiming to win powerlifting competitions, you should still train with weights. ALL women should lift weights.

But there IS a such thing as training too lightly.

What is “light” is actually relative. One woman’s warmup weight might be another’s grueling set. Certainly, if you can do 20 repetitions, you’re training too lightly.

If psychologically you can do only eight, then set the resistance so that eight reps are very challenging.

For an optimal sculpting effect, the protocol should be 8-12 reps per set, for which any more reps would be nearly impossible due to the selected amount of resistance. Rest 60 to 75 seconds in between sets.

The obese person who can lift more weights than you – assuming that you’ve been strength training for a good while – isn’t necessarily healthier in terms of blood work, risk for cancer, risk for stroke, risk for heart disease and risk for other conditions that are caused by obesity such as osteoarthritis, liver disease, kidney disease, blood clots, infertility and miscarriage.

However, the obese person who trains with heavy weight is a lot healthier and fitter than a sedentary obese person.

Or, to put this another way, she is a lot healthier and fitter than her own sedentary version!

This also goes for thin people: The thinner person who lifts heavy will tend to be a lot healthier and fitter than the sedentary thinner person.