What Kind of Doctor Never Has to Examine Anything Gross? 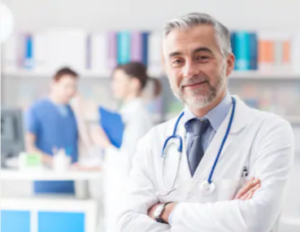 Are there medical specialties, once a doctor has completed their training, that will never involve viewing anything “gross”?

For those interested in medicine, the prospect of having to look at something very unsightly may make some people hesitant to pursue a career directly working with patients.

However, there’s hope. There are medical specialties that involve working directly with patients – but that don’t intrinsically require viewing conditions that can make the practitioner feel squeamish.

But keep in mind that in order to arrive at such a specialty, the physician-in-training will be required to look at all sorts of faint-worthy things.

“To qualify as a doctor you have to complete several years at medical school,” says Dr. David Beatty, MD, a retired general practitioner with 30+ years of experience and an instructor of general medicine for 20 years.

“In my first week there we were studying anatomy. This involved gradually dissecting a cadaver to learn the structure of the human body.

“After a couple of years we rotated around all the medical specialties. There was no option to avoid surgery or ER or any other specialty that an individual didn’t want to do.

“After qualification the doctor has to do junior hospital jobs in a medical and a surgical specialty — this includes assisting with surgical procedures.”

Dr. Beatty explains, “You would be less likely to see really gruesome stuff in general practice rather than surgery.”

But that’s a relative concept. What general practitioner never has to look inside someone’s mouth?

“If looking inside someone’s mouth is your deal breaker, don’t choose general practice because I would have had to do that 20 times a day during the flu season.”

My father needed a motorized scooter. He was seen by a medical doctor to determine how to customize his scooter.

The physician asked him questions about his mobility and pain, then observed him using his walker plus other directed leg movements.

He had him sit in a sample scooter, then exit it. There were other observations as well.

Not once did this doctor look inside my father’s mouth, inside his ears or up his nose.

All day long, this doctor’s job was to speak with physically disabled patients, observe their mobility and then write up orders for customized scooters.

Now certainly, it’s always possible that such a doctor will inevitably have to view something very unpleasant, being that most of his patients were elderly.

It’s entirely possible that a patient could walk in who has advanced, untreated basal cell carcinoma on his face.

Or, the patient might have an unsightly eye condition.

So though the doctor won’t be examining these issues, he won’t be able to avoid looking at them, either.

The EMG neurologist attaches electrodes to the patient, then operates the equipment to analyze nerve conduction to the patient’s muscles.

It’s not required for the physician to view anything “disgusting.”

But again, the next patient walking in could have a skin condition that’s difficult to look at.

Another type of doctor who wouldn’t be required to inspect gruesome conditions is one who specializes in movement disorders such as multiple sclerosis.

And yet another type of physician who very likely won’t be seeing anything gross is the sports medicine specialist.

Most of their patients will be younger — and fitter than the average person — and hence, less likely to have any revealing issues that are hard on the eyes.

However, beware: Sports medicine doctors do need to examine feet sooner or later. Not all people with injured or painful feet head straight to a podiatrist (foot doctor).

A sports medicine doctor may find themselves examining a foot with fungus-ridden toenails, or just overall unkempt toenails.

My mother at one point would have annual visits with a gynecologist who, as she put it, was a “breast specialist.”

This doctor didn’t perform surgery or conduct internal pelvic exams; she simply examined breasts. There would be little chance of having to view anything “yucky,” though there are nipple conditions that aren’t pleasant to look at.

What about a doctor who reads mammograms all day? There won’t be anything visually disturbing to look at, but the catch is that there isn’t patient contact, either.

This job would be ideal for someone who wants to be a medical doctor, actively involved with patient care, but not having to examine any patients.

Another type of doctor whose job requires relative ease on the eyes is a cosmetic vein specialist (focusing entirely on the treatment of varicose and “spider” veins).

Surgical hair restoration, too, would be an ideal medical specialty for those who are sensitive to viewing internal parts of the body, injuries, infections or other “nasty” conditions.

How about a sleep medicine doctor?

Well, a sleep medicine doctor will have to look inside the patient’s mouth to see if there’s any abnormalities causing sleep problems such as a narrow airway or excess pharyngeal tissue.

What about non-surgical bariatrics?

Bariatrics is the field of medicine specializing in obesity. But a bariatric physician who doesn’t perform surgery may still have to look inside a patient’s mouth.

They may also need to examine feet, since obesity can impact feet, including the presence of edema or venous insufficiency.

However, a doctor who’s board certified in obesity medicine can open a weight loss clinic or be a practitioner at such a clinic, dealing with many clients who aren’t sickly but who just want to effectively lose some weight.

What about a pain medicine doctor?

A doctor who specializes in fibromyalgia will probably have to do some mouth inspections, but other than that, it’s a pretty “clean” specialty.

A doctor who’s board certified in pain medicine may snag a position at a clinic performing only epidural injections.

However, at a major hospital, the doctors who perform these procedures typically also oversee general anesthesia for surguries.

Prepping a person for general anesthesia requires — you guessed it — looking inside their mouth.

“Fortunately, everyone is different,” says Dr. Beatty. “I don’t mind looking in someone’s mouth, but I was never inclined towards working on a burns unit.”

The field of psychiatry would also be exempt from having to inspect diseased tissue or viewing inside body parts.

The only way to entirely escape from having to look at something that can turn your stomach is to choose a line of work that doesn’t require patient interaction.

“You might be able to avoid gruesome things doing academic research, as long as it didn’t involve animal experiments,” says Dr. Beatty.

“Doctors involved in medical education might not have to do any hands-on medicine.”

My niece is a medical doctor and never examines patients because she heads an organization that brings awareness to a life-threatening medical condition.

“Radiology always used to be a good one if you wanted to avoid patient contact,” continues Dr. Beatty.

“However, with the development of interventional radiology this usually now involves invasive procedures.

“Medico-legal medicine might be an option. All the medical defense firms will have doctors working for them in an advisory capacity.”

When I was proofreading medical malpractice and personal injury litigation transcripts as part of my editorial business, I clearly saw that some doctor-expert-witnesses did only that: providing the defense their expert opinions. And they got paid extremely lucratively by the hour!

The caveat is that defense attorneys are much more likely to retain doctors who’ve had years of experience with direct patient work.

Furthermore, medical expert witnesses often need to be extremely knowledgeable of procedures that require a strong stomach such as surgery and delivering babies.

“Medical journalism doesn’t require you to examine patients, but you may have to deal with photographic material some people might find offensive,” says Dr. Beatty.